The New York Post, America's best newspaper by a wide margin. We also would have accepted "Crabs in a bucket!" or "The content of their character!"

A wild, caught-on-camera brawl broke out between two families dining at a crab restaurant in Mississippi — the latest in seafood-centric dust-ups, according to a report.

We are facing a national crisis of "seafood-centric" jungle violence. My 500 billion shekel (Cheap!) "Lobstah Tayle Plan" will try and fail to control the typical negro failure seen in these venues. Throw in a few trillion (Might as well, you've already got your wallet out) and I'll see what I can do about the waffle house all against all or the Chuck E. Cheese Congo.

LOL, this is the real "paper of record" in my rotting globalist bodega. Creatures straight from a nightmare briefly engage in a simian dominance ritual before the brawl ridiculous. They were trying to make themselves appear larger and the next thing you know it's big chimping.

But the scuffle turns violent when some of the brawlers begin throwing punches — along with chairs, glasses, and napkins holders, according to the footage.

The jewish bargain of a lifetime, brought here in chains and released as permanent burden and dangerous societal parasite. The only solution is their removal. We need our own country.

“The little children that were nearby could have easily been hurt,” Stella Jones, assistant manager at the restaurant, told the station.

Sheeet, eye bee worrin bout dem liddle nikkas. Dat R-Strategy ree-pro-duct-shun doe. Meanwhile, Whites are having zero children because of the "climate emergency," yet another imaginary disaster for the final days of our dead nation.

“This is our first experience of something like this, so we’re gonna have to put something in place.”

I somehow doubt it.

Don't worry, I'm sure they'll be caught and severely punished by "racist" kkkorts, just like all the dusky scumbags who burned and looted our national corpse last summer. Also, there goes what was sure to be a generous tip.

No other customers or workers were injured during the brawl and the restaurant offered discounts to people who witnessed it.

To make up for the appalling monkeyshines, here's a 5% discount on refills. You might actually get tired of winning.

It wasn’t immediately clear what started the fight.

The complex tapestry of the "African-American" experience. We may never know. Posterior size debates? "Yew ain bout it bout it" issues? It's an impenetrable mystery.

The previous month, a fracas over crab legs at an Alabama buffet turned into a brawl where hungry diners jousted with tongs and smashed plates. 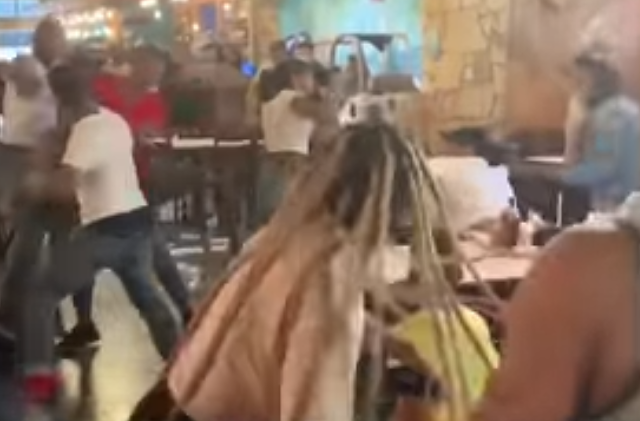