A Head With Two Eyes

America is riddled with vile "racism" from Whites. To be a good little bar code within our kosher globalist bodega you need to believe this, but the actual evidence seems rather lacking. Sure, you can turn on your talmudvision and see grainy footage of those knights in white satin, but meanwhile, here in Current Year, all we ever see is endless appeasement, cowardice and failed attempts to trade space for time. Even as we become the official scapegoat for the spectacular failure of the "multi-cult," your typical colorless person has a lot more jew-instructed "hate" for other Ice People and a nice helping of self-loathing on top of that. Obviously,  this is bad for the official cultural marxist narrative, so we need at least some hint of the "original sin" that isn't eighty-year-old potato cam film of "wizards" standing around. We need phony hate crimes, the more ridiculous and obviously illegitimate, the better. Today's example certainly aspired to this semitic standard.

The owner of a Spring Lake auto repair shop is taking action to stop vandals from damaging vehicles on his lot with racist graffiti.

The monsters are here! Bleach demons are attacking an innocent negro businessman over the color of its skin, not unlike when they bombed Tar Monster Wall Street. We need a lot more open discrimination and violent attacks on Whites.

For the past three weeks, someone has been breaking windows out of cars and painting disturbing messages on cars at Dwayne Haynesworth's Auto Body and Repair shop.

Here is what happens when you don't pass the "Platinum Plan" and there's still Legacy Americans who aren't dead. The "not-sees" are busting out windows and putting shocking messages on cars. It might be the same ones who went after Bubba Smollett. First the negro can't sit in a "whip" because of "drillahs," now the "rizz-ide" gets ruined even when the nigga body (Ah!) isn't sprawled behind the wheel.

Haynesworth is frustrated and doesn't know why he was targeted.

This is one of the most singular enigmas I've ever seen. What do you think, Sherlock Holmes? What? Really?

"I mean I'm not bothering anybody. I'm just out here trying to do business. I don't really know anybody out here," he said.

This well-behaved groid literally didn't do [anything] and still fell under the wrath of a race currently being targeted for genocide. Look at the sad alien face on this living fossil. You did this. Get in the grave.

The vandals spray painted his cars with swastikas and the image of a head with two eyes and a white, Ku Klux Klan hood. One car has the message "Please Leave" painted on it.

Now face the full might of Hitler's war machine. "I'd really prefer if you left."

Haynesworth has been renting the property on Lillington Highway for about two months. The vandalism started after one of his vehicles was stolen off the lot shortly after he started renting.

Well, that's an interesting detail. This definitely has "White evil" written all over it.

Spring Lake Police said they are taking the incident seriously and are stepping up patrols around the business.

We're going to put all our resources into investigating this obvious hoax. It's too bad we'll probably never catch the evil pink people responsible. If only we had some video footage, but of course that's not the case. I mean, it's not like I have some kind of magic wand I can wave and reveal the perpetrators. Sorry, not going to happen. Wait, my mistake. Here it is.

Although the vandals had left behind images that indicated “white supremacy” and racism towards the black business owner, Haynesworth had captured two suspects on video — and they both appeared to be black.

I know. What a surprise. 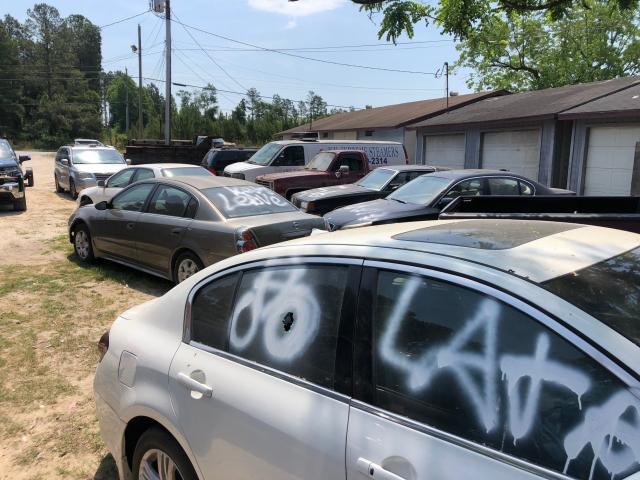