We live in a chaotic world, but there are still many events that occur with clockwork regularity, giving us a sense of continuity and comfort even with the sky falling from a deadly "pandemic" and Whites officially becoming the scapegoat for all the massive failings of our "multi-cult" zoo. These predictable cases include the phony hate crime, the dozens shot in a typical Chiraq weekend, the wailing for more, always more, after the latest negro appeasement or la-teen-oh surrender and today's topic, unbelievable idiocy being spewed by a pope who belongs on the end of a rope. The leader of the cuck-o-lick church hasn't bowed down to globalist semitic evil in at least several days, but don't worry, it's already time again.

Pope Francis on Thursday denounced “aggressive” nationalism that rejects migrants, and said Catholics should follow the Gospel-mandated call for an inclusive, welcoming church that doesn’t distinguish between “natives and foreigners, residents and guests.”

Welcome the mudslime looter, the sodomite freak, the alien criminal. There's plenty of room in all those empty pews. Once they see how weak and cowardly we are, they're bound to respect us. This piece of garbage is very popular with globalist evil, so you know you're getting the real truth.

Francis made the appeal in his annual message for migrants and refugees.

You can set your watch by it. "Time to preach replacement immigration and national suicide, you filthy goyim." "Yes, master."

He said the current pandemic had shown how the concept of the human family had been “fragmented, wounded and disfigured,” with the poorest and most marginalized paying the highest price.

Don't forget, the sky is falling. Father Fauci will now give us a sermon on why you need goggles, a welding shield and wet cement in your anus. Make sure you repeatedly take the jew jab, you contemptible worm. We've got to save "marginalized people" from the seasonal flu. Where's your "covi-pass," you pathetic slave? I will put a round in you.

The universal “we," he said, “is crumbling and cracking due to myopic and aggressive forms of nationalism and radical individualism.”

You and the 55 I.Q. living fossil squatting in its own waste in the Liberian all against all are exactly the same in your shared humanity. This obviously failed branch of humanity is part of our big One World team which is what Christ wants. I mostly skimmed through Revelation, so I might be wrong about that, but I'm pretty sure.

He demanded that Catholics in particular actually act “catholic” in the universal sense, noting that migrants and refugees enrich the faith, the church and one another.

He has visited refugee camps on his foreign visits and once brought a dozen Syrian refugees back home with him aboard the papal plane.

Get on the Pope Plane, moe-ham-head. We're taking you to a magical land of cowardice, weakness, appeasement and imminent collapse. Try to scavenge some of the better viscera from the reeking carcass before it completely rots away.

His appeals for governments to welcome migrants have often fallen on deaf ears in Europe and the U.S., particularly amid the growth of nationalist political movements.

This total lunacy is only going to get more and more unpopular as we fight for our continued survival against a deluge of brown sewage. Whites are waking up.

“A commitment that makes no distinction between natives and foreigners, residents and guests, since it is a matter of a treasure we hold in common.”

On tonight's episode of "Cucktianity or Communism?" our contestants will face some of the toughest challenges yet. No, sorry, this wasn't jewish communism. It was from a pope who deserves the rope. 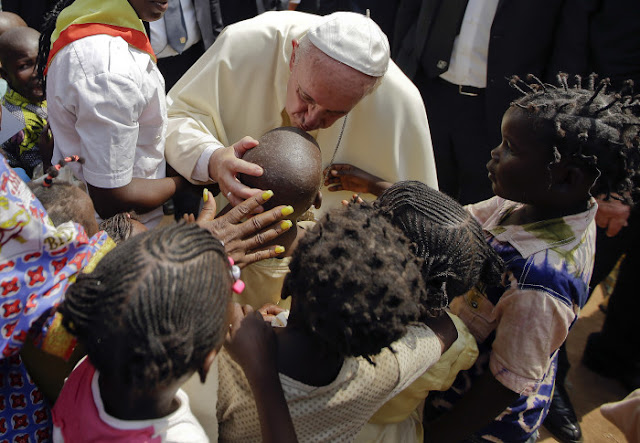