Gonna Get Dealt With

Grab a handful of anti-depressants, a plate of partially cooked maggots and your estrogen drink with the weird little "U" on the bottle, it's time for the evening news. We're looking for a "woman," meaning a living fossil, who was involved in a "fight," meaning a completely one-sided attack on an Eloi. Not exactly a hot start for the fraud news. Nevertheless, it's time to break out the "serious voice," normally reserved for Cohen-19 death statistics and innocent good boys murdered by "racist" police, as we toss it to Holly Hottentot at Little Caesars.

It looks like "Renetta" might have been getting into some of that "peat-zuh," judging by an obese frame, no doubt created by the mental, physical and spiritual ravages of "black fatigue." Aunt Jemima explains that vaguely humanoid units are "choosing sides" on whether or not living in a profoundly ugly all against all is a good thing. Is it okay to randomly brutalize snow hoes against the backdrop of a rotting nation in the midst of the final collapse? Only our best moral philosophers and lovers of the truth can make this determination and luckily we have two likely candidates for The Academy in the form of primitive tar monsters.

A 70 I.Q. inferior suggests "handling it in a different way," presumably zapping the offender while it's sitting in a "whip" instead of a brawl ridiculous at the SPQR slop shop. We are not here to praise Little Caesar, but rather to bury him. We get some more footage of the attempt to "bee datt beech." A groid calling itself "Bull" gives a mostly incoherent answer, complete with a bizarre reference to "Jesus standin raht derr." Can anything good come out of Weimar America? Come and see.

We leave the Plato and Aristotle our dead nation deserves to examine the finer details of the jungle violence. The miscegenation case is dragged across the floor by her hair like a Neolithic war trophy. The negro is a very desirable partner, shiksas. So cool and hip, not like stiff and boring Whites. It's time to stomp some "dome." Do you want to know what the future will be? Imagine La-ah's foot stomping on a race traitor's face, forever.

We now solicit the opinion of a debased White. Somewhere a fat bloated jew plutocrat is watching this and howling with laughter, barely able to believe how it could destroy a country without even getting its rat claws dirty. Em and Em here thinks the Stone Age all against all is wrong, so the kosher process of completely destroying his soul isn't finished yet. Meanwhile, on Faceberg, the horrible truth that this "fight" was over "children" is revealed. Crank out a Curious George, get hammered by an evolutionary dead-end while the brown slaves promised by the talmud watch with depraved indifference...this is not what the "Fresh Prince" on my talmudvision said would happen.

It's back to "Bull," who makes a semi-intelligible point about "staying in yo layne." You might also want to avoid sitting in your car in the predawn hours. Without any true resolution, we conclude this latest glimpse of the coming nightmare. 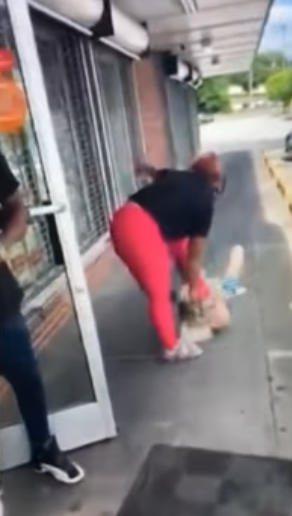