We must never forget the precious six million jews that were lost to homicidal gas chambers and other, equally plausible, execution methods. Being conversant in these absurdities is sure to be a useful skill when you're a hated minority living in a dead country. In other words, simply knowing about the wooden doors and glass windows "gas chamber" is just the beginning. The cattle need to know about the fire pits, the electrical belts, the rooms where all the air was sucked out (no gas chambers?), the skull smashers, the tree the merchants had to climb that was then cut down while shlomo was dangling from the limbs like a schwoogie, the masturbation death machines and all the rest. Today we're going to address another head of the evil Teutonic mass murder hydra, specifically the "death march." It's like a normal march, but you die. Come on, use your imagination!

With Adolf Hitler's murderous Third Reich on the verge of total defeat in January 1945, Jews who had avoided a horrendous fate in gas chambers were forced by the Nazis to 'evacuate' their network of concentration camps.

Yeah. "Forced." They were fleeing from jew-endorsed Soviet atrocities, a fact this article will later accidentally confirm. I know if I was trying to exterminate a people group I'd force them to go on nature hikes instead of just putting them against a wall, like in actual genocides which really happened. The legendary efficiency and heartless cruelty of the Germans. We're going to make you march away from Stalin's rapists and killers.

Known as the death marches, men, women and children had no choice but to travel hundreds of miles on foot, by rail, in horse-drawn wagons and in lorries.

You read this correctly, the poisonous mushroom is whining about the time it had to get in a wagon so it wouldn't be sexually assaulted and shot by Mongoloids stirred into a violent frenzy by semitic communists.

Thousands were murdered at the roadside by their Nazi guards, just days before the end of the Second World War.

Seems plausible. I'm going to make my own attempt to flee the red evil more difficult by zapping merchants. If you're unfamiliar with the real history of the final days of Europe's Second Jewish Century Suicide Attempt and the accompanying kosher horrors I'd recommend "Ten Years and Twenty Days" by Karl Doenitz. During the author's brief time as leader of National Socialist Germany he did his best to save civilians from Soviet (and American) war crimes and this is discussed in detail in the final chapter.

Now, first-hand accounts of people who survived the last chapter of the Holocaust – in which six million Jewish men, women and children were murdered – are to go on display.

Wow, I can't wait to hear scrupulously honest stories about how the merchant was mildly inconvenienced while the future of Europe was devoured by flames on a massive funeral pyre.

The Wiener Holocaust Library's 'Death Marches' exhibition, which opens tomorrow at the organisation's London base, will feature testimonies which have been translated into English for the first time.

Welcome to Cuck Island. We saved the world from the vile "not-sees." Now to go to a special exhibition consisting of outrageous propaganda from our jewish enemy. If you deny or even diminish any of this ludicrous kosher snow job you'll be put in prison, so be on your best behavior.

The library, which collected testimonies from survivors in the 1950s and 1960s, hopes to shed light on what it called 'mobile concentration camps'.

I've never referred to my daily constitutional walk as a "mobile concentration camp," but I definitely will from now on.

Dr Christine Schmidt, the exhibition's co-curator, told The Guardian: 'There weren't that many survivors of the death marches, so these testimonies we have are rare, and are quite precious documents … This vast, chaotic period is a story that isn't often told.'

Think of all the valuable "it was really humid on the train" whining we're trying to save. I look forward to using the "precious documents" as toilet paper in a blasted wasteland following the national collapse.

They have been digitised and can be accessed on the library's Testifying to the Truth database.

Make sure you read all the tall tales from human-shaped demons in my Kvetching with Supreme Honesty database.

The remaining 1,185 translated testimonies will be released later this year. They include accounts from people who survived by hiding in attics and cellars or through the use of false identities.

I gave the "nazzees" papers that said my name was "Jon Stewart" and they fell for it.

Others recall their experience of living in concentration and death camps, the most famous of which was Auschwitz Birkenau, in what was then Nazi-occupied Poland.

Living in the death camps. Do you even think before you speak anymore, merch?

Survivor Gertrude Deak, whose account features in the new exhibition, told how she and her fellow inmates had to 'walk barefoot in the snow without any food', with guards shooting 'anybody' who 'stopped for lack of strength'.

Barefoot for thousands of miles in the snow, uphill the entire way, gentiles blasting the weak, the horrible sufferink caused by jealousy and certainly not a pattern of appalling behavior that repeats in any nation unlucky enough to have this parasitic infection.

Ms Deak, who was later known as Trude Levi, was left for dead after collapsing from exhaustion but survived by hiding in a barn.

You just said anyone who stopped got shot. It was literally one sentence previous. Once you make all critical examination illegal the lies sure get lazy.

She was then found by Russian soldiers who attempted to sexually assault her.

Jewess is hit by friendly fire from the mongrel Asiatic hordes its own tribe unleashed.

Her memoir, A Cat Called Adolf, will also be on display in the new exhibition.

The title should have been "A Rapist Who Looked Like Genghis Khan."

Dr. Schmidt said of Ms Deak: 'Hers is a remarkable story of survival in which she was on a death march, then was hiding in a barn, and survived attempted sexual assaults by soldiers and people she encountered.'

Another story featured in the exhibition is that of Sabina and Fela Szep, two Polish Jewish sisters who were sent on a death march.

Hopefully they won't stray from the official narrative and tell the truth about Soviet atrocities.

One image shows them before they were physically 'devastated' by their time in the camp.

One of the sisters died after the image was taken, Dr. Schmidt said.

It happened fifty years later, but that's not important. 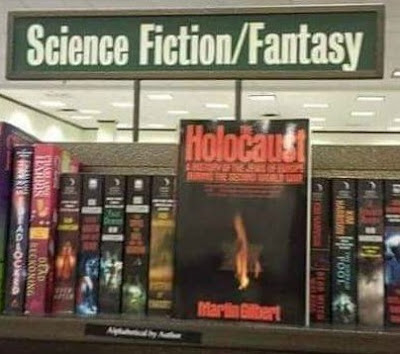