Please watch the following amazing video. Be sure to copy and spread, this sort of thing has a habit of disappearing off jewtube.

The insane tribal all against all from genetic aliens is already in progress when we start, with creatures straight from a nightmare sprawling across the floor, ripping off clothes and generally demonstrating why the only sane solution to the "African-American" problem is their removal. Also, the phrase "Sir, this is a Wendy's" is finally appropriate. One negro punches another in the arm. I thought these creatures were supposed to be good at boxing, but I guess that was just a kosher mythology like all the others. As if that wasn't bad enough, a "ratchet" then drags Barkevious by its fur while pummeling the living fossil. We really need to get that infrastructure bill passed right away. Here's a button I can press that prints the not-so-precious six trillion. My country is definitely not in a semitic death spiral.

A creature that looks like something from Chapter One of an Anthropology textbook demands some "one on one," presumably contested under Queensbury rules. I'm also amazed at the sheer volume of African Tree Hockey merchandise, including a team the mainstream media once called "The Los Angeles Niggers." If you ever wondered where your tax dollars were going, here's your answer: providing "jore-dinn" make-believe outfits for genetic aliens. "Eye beet yo azz." We're probably only one or two miracles away from turning these animals into cut-rate Whites. Did you know Tulsa was "Black Wall Street" before it was destroyed by evil White "racists?"

The Mandingo Fighting now spills into the kitchen area and the greasy floor proves a considerable obstacle to the attempts to fully express the content of their character. This environmental vicissitude leaves one coal creature flat on the floor, absorbing a series of poorly executed punches. Man, I sure hope Civil War 2 never happens. Back in the dining area, two Magic-Americans grapple, while another negro in a fresh "Rugrats" jacket heads to the back. This continuous and dynamic unbroken shot certainly calls to mind "Citizen Kane." Now we just have to teach the 70 I.Q. brigade not to hold the phone vertically.

One groid is losing its pants. "Can I get a burger?" Sorry, the jungle warfare has rendered this triumph of kosher capitalism unable to perform its intended function. Clubbing blows reflect off a plastic screen that is saving lives in a deadly "pandemic." All we need is some circus music to play over these proceedings. Proud black women who don't need no man are trying to imitate spoken human language, but I'm unable to understand anything. Probably something about how systemic "racism" and White privilege caused this. "Datt nikka juss gawt whupped!" If I won a technical decision, mainly because the floor wasn't clean, I'm not sure I'd be bragging, but on the other hand I've got a triple digit intelligence quotient and the ability to connect current actions to future outcomes.

In a nice Clown World touch, the monkeyshines have moved beneath an Orwellian "Equality is our Recipe" slogan on the wall. Suffice it to say, the proof is in the eating. A coal creature throws a wild haymaker that misses by several feet. Race isn't real. We're all human. You caused this. "Let's get busy!" One tar monster seems to be trying to push another into the garbage. This is where they belong. If you have fast eyes you might spot the only White in this video so far. He's on the phone, presumably calling the "coppers." Sorry, we've been defunded because some worthless criminal groid overdosed. If you are currently being murdered, please stay on the line.

The all against all continues. A Wakandan has its pants nearly around its knees. I heard America was back. This is the hard nucleus that will save this nation. The "five oh" has arrived. I sure hope these evil bleach demons don't murder any of these innocent and cherubic "teens" because of the "color of their skin." A taser is deployed without result as chairs come into play. Incredibly, the brawl stops. It appears zapping Fat Albert was more effective than initial appearances suggested. This is followed by an excellent chance to hone your "negro babble as a second language" skills. This is what happens when you ineptly "whup a nigga" but it refuses to stay "whupped."

An overweight la-teen-ah officer waddles into frame. "You late, sis!" Yeah, no kidding. It looks like they might arrest one of the "people of color." It's better than the usual result, I guess. "He gone! Can I still get a burger or is the register closed?" R.I.P. U.S.S.A. 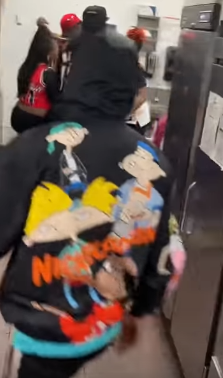