Once we get rid of the "racist" police and completely give up on the idea of punishing the appalling and moronic behavior of the sacred negro, I'd be shocked if we don't see immediate positive indicators from the genetic aliens we worship. We're very, very close to turning the permanent burden sold to us by jewish slavers into something that isn't a massive existential threat to the future of our globalist carcass. In Chiraq we're seeing a lot of this progress, as complaints against the "five oh" are now slightly down, if you don't count zapping an "unarmed" la-teen-oh alien. We're probably only one miracle away. Let's take a look at the precious 45 (not the stair chosen) who got blasted in the tribal warfare all against all.

At least 45 people were shot in Chicago this weekend, and five of them were killed. The victims included five people wounded in a shooting near the Chicago Bulls College Prep High School on the Near West Side.

We were very impressed by your transcript from Chicago Bulls High School (!) and your personal statement where you wrote "blatt libes mattah" a hundred times. You're exactly what we're looking for here at Harvard.

Police said said a group of people was standing outside around 11:20 p.m. on the 2100 block of West Adams Street, when at least three people inside a gray Audi SUV started shooting.

The strong aiming skills of the "African-American" failure. I sure hope my extremely healthy nation isn't careening toward civil war.

The first fatal shooting happened at 10:48 p.m. in the 11800 block of South Lafayette Avenue in the West Pullman neighborhood. A 37-year-old man was outside with a group of people when a quarrel ensued between him and another man. The quarrel turned into a physical fight and the second man shot the first in the head before leaving the scene.

Cold fusion is definitely possible in the near future. I will now bludgeon the obscurantism out of you with Queensbury rules fisticuffs. Hello, it appears a blunderbuss has been deployed.

At 11:16 p.m. Saturday, a man was in the front passenger seat of a vehicle in the 800 block of East 87th Place in Chatham when several shots were fired in his direction. He was shot three times in the head and twice in the left arm, and was rushed to Jackson Park Hospital where he was pronounced dead.

Saturday night in the Chicongo zoo. Time to sit in a car and wait for the inevitable.

Race is a social construct. Skin color is caused by climate. I.Q. tests measure how immersed you are in White cultural norms and nothing else. We're all equal. The jews are g*d's chosen. Whites are bad and deserve to die.

The man who was killed was identified as Benjamin Dawkins. The surviving victim could not provide a description of the assailant.

"A turd with eyes" is not a useful description.

At 2 p.m. Sunday, one man was killed and another was injured in a shooting in the 800 block of North Ridgeway Avenue in Humboldt Park. The victims were on the sidewalk when someone walked up and shot them, police said.

How about some insane all against all in broad daylight? If only we had the 500 billion shekel "Platinum Plan" I'm sure this walk-by shooting wouldn't have happened, but it's too late now.


At 3 p.m. Sunday, a 17-year-old boy was driving in the 4800 block of West Ferdinand Street in South Austin when some assailants on foot fired shots in his direction. He was shot in the face, and his vehicle crashed into a light pole.

A man was also found stabbed to death early Saturday in Little Village. At 1:29 a.m. Saturday, the 35-year-old man was found on the sidewalk in the 2600 block of South Christiana Avenue with stab wounds to the chest. He was taken to Mount Sinai Hospital, where he was pronounced dead. He was identified as Erick Villeta.

See, it wasn't all negroes, you awful "racist." It was also la-teen-oh garbage. We need common sense knife control, even though it doesn't really count as a weapon and deadly knife fights are a big part of a normal childhood.

Another man was stabbed to death in East Garfield Park at 2:26 a.m. Sunday. Police were headed east on Harrison Street near Francisco Avenue when they saw two men on the ground fighting. When police approached, one of the men tried to run off while the other remained lying on the ground.

By not intervening and allowing the lethal monkeyshines we saved our jobs. 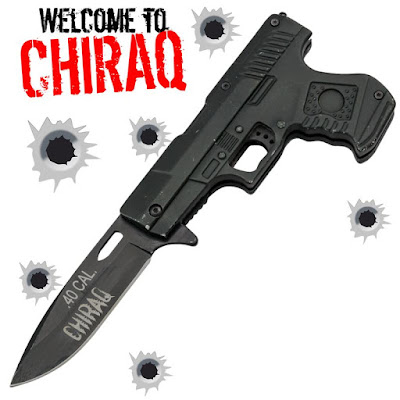