If you want to find good news in today's world, Eastern Europe is the best place to look. I was eager to watch my Budapest Ball, featuring a team of my fellow Whites. Time for some grandstanding from the Irish Truth Famine. I'm going to make hate noises.

The Boys in Green were booed as they took the knee prior to Tuesday's 0-0 draw in front of an estimated 10,000 fans in Budapest.

I'm sure we'll see a massive outbreak of the "mutant strain" after thousands gathered, many of them not wearing several "makks." If you disagree with me, you're disagreeing with science the great and terrible.

Orban said kneeling to protest against discrimination before sporting events was a custom related to slavery and alien to the central European country, adding that pressuring athletes everywhere to follow suit was "provocation."

It's definitely related to slavery, namely the enslavement of The West by an alien parasite and its endless attacks on our ancient homelands. We're not going to submit to the jew.

Hungary, one of 14 host nations to the upcoming Euro 2020 championship, has been ruled for 11 years by hardline nationalist Orban, who has ruffled feathers with his tough anti-immigrant, nativist rhetoric in recent years.

Oy vey, the horrible rhetoric from a hardline nationalist and "racist." I guess we should be happy shlomo didn't call him a dictator or "the next  Hitler" for displaying basic sanity and resisting the semitic metastasis. It sure would be nice to have a leader who actually represents the indigenous White population instead of a senile puppet of international jewry.

Stephen Kenny described the boos as "incomprehensible", adding: “It must be damaging for Hungary, with the Euros in Hungary. It’s disappointing and it doesn’t reflect well on Hungary and Hungarian support.

Why aren't they supporting afromania designed to encourage violence against Whites and the collapse of our institutions? I don't understand, it's like they don't want to get into the grave or something. Shame on your Hungary. I can't believe you're not worshiping the criminal negro.

“I think it was the right decision. I approached [international operations manager] Barry Gleeson and said it was something we wanted to do, to take the knee.

I'm going to get an amazing eulogy.

But Orban, who faces his toughest election challenge after three successive landslides against a united opposition next year, said Hungarian athletes were expected to "fight standing up".

Stand up to evil or die on your knees, groveling. Which way, Europe?

"The fans reacted the way those who are provoked usually react to provocation. They do not always choose the most elegant form (of reaction) but we have to understand their reasons... I agree with the fans."

In a perfect world they would have done a lot more than just make noise, but I do agree with it.

Orban said he had no sympathy for "this kneeling business. I don't think this has any place on the pitch. Sport is about other things."

"This is a hard, serious moral burden, but every nation must carry this burden on their own," Orban said. "They need to sort this out themselves."

I'm sure we'll see lots of self-flagellation from the Israeli team that acknowledges the central role of the jew in muh slavery. 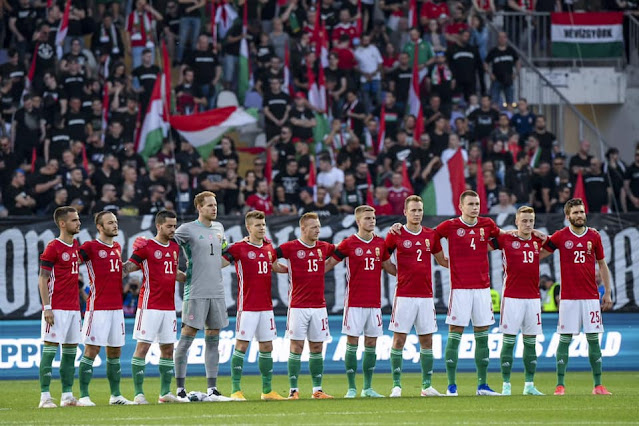