As hard as it is to believe, making a jungle idol out of the negro criminal and bowing down to it when the jew beat the drum seems to be the g*d that failed. For whatever reason, the massive and disgusting groveling and surrender in the face of the genetic alien doesn't seem to be helping. Maybe we're just not doing it hard enough. You have to really believe or the miracle won't happen. Either way, the summer "busy season" has arrived in our urban zoos and the content of their character might be the worst we've ever seen. It's almost like there are consequences to delusional weakness. Now Chiraq faces a crisis of dusky "open shooter" incidents and it's time for the entire dead kosher country to bail out the Midwest Mogadishu.

At least four people were killed and four others were injured Tuesday morning in the second mass shooting in Chicago in four days, police said.

We've run out of room in the memory hole. We are now forced to finally acknowledge the appalling behavior of a failed race that needs to be removed.

A barrage of gunfire erupted just before 6 a.m. in the city's Englewood neighborhood, police said. The shooting followed a disturbance at a home, police said.

Watch out for that negro "barrage," sucka. We're bringing the high literary heat instead of the usual "Barkevious was standing on a corner when someone walked up and shot it" artless utility found in "80 shot in Chicongo weekend" fodder for forgetfulness. We are facing fusillades from our dusky equals. Please send help.

Several people were gathering inside when the shooting started, police said.

I guess the global "pandemic" of Cohen-19 is over. You can get your "house party" on. At least we destroyed muh democracy and the economy over this asinine snow job.

ABC station WLS-TV in Chicago confirmed through police sources that four people were pronounced dead at the scene. The names and ages of those killed were not immediately released.

A tar monster mass shooting that actually produces a respectable amount of suddenly non-dangerous "African-Americans?" We are truly living in interesting times.

Chicago Police Superintendent David Brown said at a news conference that three women are among the dead.

We draw down on them hoes. Also, heckuva a job there Brownie.

The motive and details of what prompted the shooting are under investigation. No arrests have been made.

I know all this lawlessness and incompetence looks bad, but the "racism" accusations are down by 3% this month.

Brown said police were initially called to the neighborhood around 2 a.m. to investigate a report of shots fired near the home where the quadruple homicide occurred.

We initially assumed this was just another coal creature getting smoked while sitting in a car and not a Rwanda-style massacre.

He said when police were called back to the area at 5:45 a.m. they discovered multiple shooting victims.

Yes, it took nearly four hours to notice the nigga bodies (Ah!). I heard America was back.

Brown said police have responded to the same home for "disturbances" in the past but declined to give specifics on what the previous calls were about.


This "racist" profiling of innocent good boys needs to stop.

Whether an "assault weapon" with a "tactical stock" was used remains unknown as of this writing.

"We must acknowledge this for what it is -- a tragedy that has ripped apart families and inflicted intense trauma on several individuals," Chicago Mayor Lori Lightfoot said at a news conference on Tuesday. "It tells us that we still have much work to do."

Much more needs to be done. We made a lot of progress by having formal discrimination against Whites while the insane tribal all against all kept spreading, but we're not quite to the promised land.

"What we will likely learn as the details become clearer is that illegal guns continue to plague us," Lightfoot added.

The "illegal gun" jumped up on its own and started blasting nightmare monsters, much in the same way that malt liquor contains a secret ingredient that makes brothas hos-tile.

"Gun violence continues to have a deep and painful history in our city. Unfortunately, Chicago is not unique. We are part of a club of cities for which no one wants to belong, cities with mass shootings."

Join the club! Bring moronic and violent brown outsiders into your formerly peaceful White neighborhood. Maybe one day your stiff and boring non-diverse area will be mentioned in the same dismissive breath as Chiraq, Bodymore, Dee-toilet, Killwaukee, Jew York...

She pleaded for help from the federal government, saying, "This is a national problem."

Time to add "one giant net for Drillinois" to the "infrastructure bill."

"Cities individually cannot tackle this problem. We just cannot. In Chicago, we've done absolutely everything possible and we need help from the federal government," Lightfoot said.

We defunded and vilified the police, made anti-White discrimination our official policy and steadfastly ignored the Dark Continent collapse. We have done everything possible. Save us, Obama!

"When guns are so porous that they can come across our borders as we see every single day in Chicago, we know that we have to have a multi-jurisdictional, national solution to this horrible plague of gun violence."

This is my new porous "assault weapon." It's made of coral. More wasteful and doomed programs, designed for maximum corruption and waste, are the solution.

Chicago police officials said investigators are searching for two suspects who walked up to a crowd gathered on the sidewalk in a business district in Chicago's Chatham neighborhood and opened fire just after 2 a.m. on Saturday.

I know this sounds crazy, but maybe some sort of description of these suspects might be helpful. 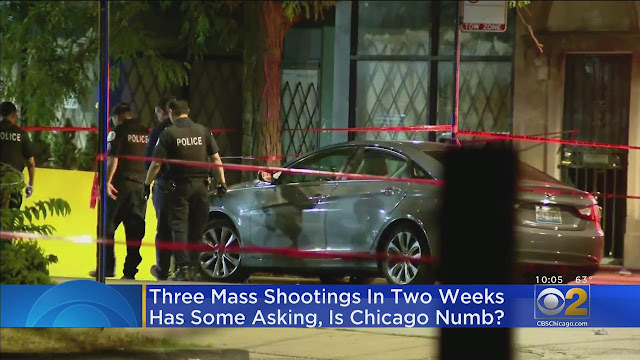