We are steadily winning the war against reality. Any criticism of obviously incompatible alien outsiders has been silenced and we can now blame the predictable failures of violent inferiors on Whites. Our great democracy now functions without the consent of the governed. We celebrate sodomy as a wholesome expression of "love." Make sure to take the jew jab to defeat the Cohen-19 and just be thankful you have any rights left. You're going to live in a shipping container and eat bugs. The center can definitely hold. Incredibly, not everyone has meekly accepted this new Judeo-Clown America, but the good news is you can turn them in to our benevolent ruling junta. Keep your eyes and ears open for Wrong Think. Our kosher globalist open sewer needs your snitching.

President Joe Biden’s administration announced their plans to create ways for Americans to report radicalized friends and family to the government, in an effort to fight domestic terrorism.

This is certainly not going to lead to a pathetic modern version of the witchcraft hysteria. Betray your friends and family, we must protect our glorious "idea" bodega from hate facts. For your loyal service to our mongrel sewer we're increasing your cockroach ration from seven to five grams.

In a conversation with reporters, one senior administration official explained the importance of stopping politically fueled violence before it started.

Orwell tried to warn us, but we were too busy watching negro ball and semitic pornography. Now it's here. Thought Crime is the enemy.

“We will work to improve public awareness of federal resources to address concerning or threatening behavior before violence occurs,” the official said.

You probably didn't even know we had a Miniluv, let alone all the amazing resources it has to offer.

The official cited the Department of Homeland Security’s “If you see something say something” campaign to help stop radical Islamic terror as a domestic possibility.

These insane new laws will stop moe-ham-head from detonating, we were told. They will never be used against you, that's for sure.

Biden began his presidency with a stark warning in his inauguration speech about the “rise in political extremism, white supremacy, domestic terrorism that we must confront and we will defeat.” 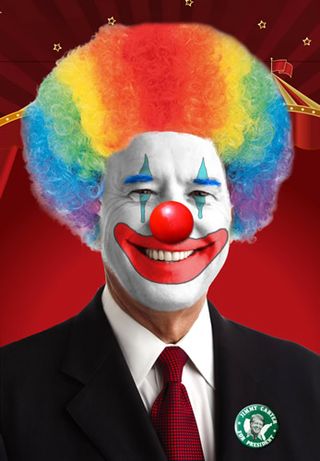 On June 1, Biden described the threat from “white supremacy” as the “most lethal threat to the homeland today.”

You must parrot this absurdity to keep your careerism. I'm watching you, scumbag. You better hate Whites, including yourself, if you don't want to end up in a cage.

We will protect you from unhealthy ideas that contradict the strident kosher bleating from your benevolent ruling synagogue.

The official reassured reporters that the administration’s new strategies would remain “laser-focused” on stopping violent acts.

I'm not sure how you can realistically stop random destructive acts without stripping away all our freedoms...I guess I just answered my own question.

“This is a strategy that is agnostic as to political ideology or off the spectrum,” the official said.

Imagine how delusional you'd have to be to actually believe this, especially after the events of the last few years.

The official added the Biden administration was taking the threat of domestic terrorism seriously and would redirect the focus of intelligence agencies on internal threats.

“We are investing many agencies of the government and resourcing them appropriately and asking our citizens to participate,” the official said.

We'll start with corrupt and evil Stalinist agencies and then recruit local busybodies, criminals and marxist slime to do most of the heavy lifting. This is a great idea.

“Because, ultimately, this is really about homeland security being a responsibility of each citizen of our country to help us achieve.”