It's been a busy week for the phony hate crime, the cynical kosher blood libel intended to encourage violence against Whites. "Chunky Sundays" in a decaying Florida park were ruined by what the electronic synagogue called graffiti hate speech and one of our sacred holy statues that must be defended at all costs was vandalized by evil colorless people. Hot on the heels of these highly plausible incidents, we've got a new situation in Bodymore, Murdaland. No, I'm not referring to the explosion of tribal warfare and the complete collapse into an African all against all. That's not important. What is important is a highly dubious "Hey rabbi..." event involving the markers placed over the only good jews you'll ever meet.

More than a dozen gravestones in a Jewish cemetery in Baltimore had swastikas spray-painted on them over the holiday weekend, Baltimore County Councilman Izzy Patoka said.

Now we know why the White supremacists didn't stage any attacks during the holiday, as predicted by our ruling junta. All the vile "racists" were busy in dead yid storage, applying the hate paint in a city which resembles Monrovia more and more with each passing day. Don't worry, Izzy here is on the case.

You'll want to drive through the "don't stop for any traffic lights" area, turn on German Hill Road and there you are.

Patoka, the descendant of holocaust victims and survivors, said the symbol is particularly impactful to him.

Patoka said Councilman Tod Crandell, who represents the area, has already been in touch with local police.

Authorities who are completely helpless against the endless negro crime and "peaceful" rioting suddenly swing into action.

The two initially believed the cemetery was in Dundalk, but it is technically in Baltimore.

“Councilman Crandell and I will continue to do all that we can to ensure the folks responsible for this despicable and repulsive act are held as accountable as possible,” said Patoka.

We will find the phantom bigots responsible. A significant percentage of the city is not currently burning, stop your complaining, we're absolutely swamped here. If you are currently being murdered, please stay on the line.

Under every rock. Did the holohoax bag even a single poisonous mushroom?

“This too is America. The place for which my great grandmother fled the gas chambers in Austria,” said Cohen in a Facebook post.

This is the semitic mud golem, the mindless thrall of the alien merchant. We fled the deadly homicidal gas chambers in Austria. The great thing about having power is you don't have to put any effort into your endless lies.

“To serve and love this country requires one to live in a state of constant contradiction. Each step toward justice brings an endless reminder that people still want to exterminate us.”

The jew basically admits to being a foreign parasite with no loyalty to the host it's slowly killing. They must be getting really confident or really careless. 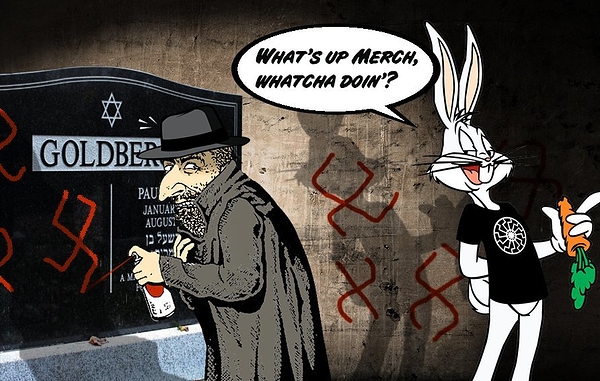 Cohen recently experienced a rash of swastika graffiti in his own district in Fells Point. The community responded by painting hearts over the symbols.

This is quite the singular occurrence. It seems the "nazis" are extremely active in jewish communities. What do you think, Sherlock Holmes?

The Jewish Cemetery Association of Greater Baltimore said they responded immediately to have the gravestones cleaned and graffiti removed.

Knowing exactly when and where a crime is going to happen really helps the response time. 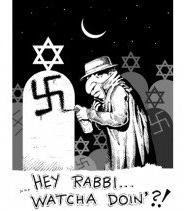