I've spent a lot of time writing about hate crime hoaxes, the cynical and lazy snow jobs intended to advance the cause of White genocide. At no point during my extensive delving into this grotesque semitic phenomenon did I ever think "We're not getting enough of these," but apparently that's the problem. Our globalist kosher bodega is facing a critical shortage of incorrectly made swastikas, "eating while black" and urban ruins getting vandalized by "nawzees" right before the hearing on funding a renovation. Even worse, Whites aren't being arrested, since these incidents either go "unsolved" or the brown alien behind the fraud gets a stern talking to after all our initial ardor to severely punish the evil "racists" abruptly vanished in the face of reality. Fortunately, our trustworthy and honest government agencies have a plan. We're going to blunt force the anti-White blood libel into existence.

The Department of Justice and the FBI have a message for local police departments: start charging more white people with hate crimes or invite an investigation.

You either start burning more witches or we'll find a burgomaster who will. These crimes don't exist, so it's necessary to create them. We know Whites are full of blind hate over "skin color," now we just need the first scrap of evidence. Go get those pink people. Meanwhile, your city has become a tribal all against all and is burning to the ground.

Associate Attorney General Vanita Gupta told an assembly of FBI agents yesterday that they are now tasked with hounding police departments in their district if they do not register any "hate crimes."

Thank you to be doing the needful, foreign alien from the other side of the world! Friendship ended with the rule of law. Now anti-White kosher panic is my best friend.

Greenberg. Must be German or something. Every. Single. Time.

According to Greenberg, the FBI will be increasingly specialized in pursuing "hate crimes" through increased training in the matter, an aggressive media campaign designed to recruit victims in "underrepresented and targeted populations," and putting federal pressure on local law enforcement to charge and report hate crimes when they otherwise wouldn't.

Clearly, the time for talk is over. We need ACTION. You can learn more at my new website FBI.gov/nazihitlerirregularhatestaffel. It's also time to "recruit victims." What a time to be alive.

Hate crimes laws are political and racially motivated. Blacks and Jews are heavily overrepresented as supposed victims in the FBI's "hate crime" database, while whites are charged at higher rates than general crime rates.

Everything we're told is a lie.

For example, last month a black man who shot five white men in a multi-state shooting spree told police his sole motive was that he hated white people, yet neither local prosecutors or the FBI have charged him with a hate crime.


You probably remember the round-the-clock media coverage, the national outrage and the congressional hearings about the pathology of the American negro. Maybe none of that happened.

According to the FBI's 2019 hate crime report, blacks are 49% of victims of racial bias while Jews are 60% of crimes motivated by religious animosity. Most of the blacks in the data were victims of "intimidation," an often Constitutionally dubious charge.

They were wearing Trump shirts and MIGA hats. I told them we must respect our holy capital building and the peaceful transfer of power. They started screaming about "our great ally Israel" and "low black unemployment." *bugs out eyes* Then they called me a nigger. Thankfully, an unarmed White woman was shot in the throat and I escaped the lynching.

A large number of reported hate crimes targeting both blacks and Jews are hoaxes, as seen in famous cases like the Jussie Smollett incident and the thousands of bomb threats targeting Jewish community centers that were the work of a Jew in Israeli.

We should be getting that apology any day now.

Just yesterday, a white man was charged with "ethnic intimidation" for putting up stickers that say "I Love Being White."

The absolute state of the U.S.S.A.

For reasons unknown, this undeclared and totally one-sided race war is not a big priority for the Greenbergs of this world.

The mad rush for white racists at the FBI is bound to cause more embarrassments for the increasingly discredited agency.

I'll be right here to document those embarrassments.

Last year, the theater put on by the FBI over NASCAR driver Bubba Wallace's "noose," which turned out to be a hoax, served to reveal the hyper-politicization and lack of seriousness at the Bureau.

We live in Clown World. 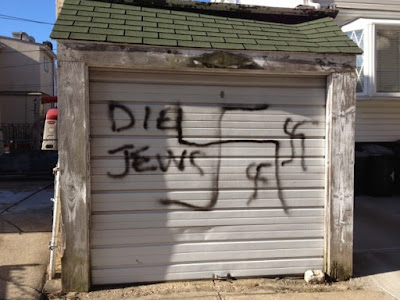