The long war against "anti-semitism," the most important struggle of our time, will only be won when Whites have been completely eliminated and the merchant gets the faceless brown slaves promised by its unholy books. Until this glorious kosher day, every last gentile must be hunted down, especially any having even the most tenuous of connections to the holohoax, an historical fiction where "we had to perform labor during a total war" somehow became, after several revisions, a lurid tale of homicidal gas chambers nearly wiping out the chosen, despite the endless and somehow growing chorus of "survivors." We must punish an elderly man for his role in the horrors described by Soviet war propaganda.

A 100-year-old alleged ex-Nazi will stand trial in October after German prosecutors charged him for playing a role in nearly 3,500 deaths at a concentration camp north of Berlin.

The precious 3,500 lost, my entire family brutally zapped to death in electric belts. Let's force someone days away from death to suffer in service of this vile fraud.

The man remains unidentified as part of Germany's privacy laws, according to the Washington Post and a local German media outlet.

This is probably the first time this law protected someone who wasn't a moe-ham-head-dan child rapist.

The outlets attempted to reach a representative for the man but he could not be reached and it is unclear whether he has retained an attorney.

Why are you such an evil nawzee? Please respond.

Prosecutors accused him of working at the Sachsenhausen Nazi concentration camp nearly 20 miles north of the country's capital where tens of thousands of Jews are estimated to have been victims, according to the United States Holocaust Memorial Museum.

The number was probably closer to zero than "thousands," but they once claimed four million went into the fire pits at Auschwitz, so this is a very modest deceit.

His alleged crimes include complicity in executions by firing squad and poisonous gas. He was deemed fit to appear in court despite his old age, BBC reported.

Your doctor has determined you're healthy enough to be a "two minutes hate" target. They were killing them with "poisonous gas." No, really.

Because Nazi camp guards generally went anonymous, prosecutors have found it difficult to identify specific defendants and prove any acts against victims.

Never let something like "facts" get in the way of your kosher snow job.

But in 2011 a court in Munich found a man guilty of accessory to murder for serving as a guard at Sobibor, an extermination center in occupied Poland, part of Polish territory turned by Nazi Germany into General Government.

A 96-year-old woman has also been accused of working as a Nazi, as a secretary to the commandant of the Stutthof concentration camp in what is now Poland, and will similarly face trial this year, the Post reported.

I'm not sure how a secretary can be considered culpable, but then again she might have typed out unflattering words about the chosen, which is the same as murder.

A legal representative for the woman did not respond to the outlet.

Why did your client kill six million jews with poisonous gas? Hello? 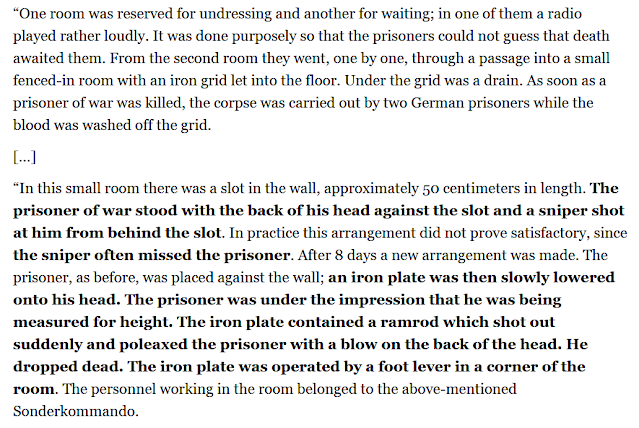