A very wise man once asked "Is our children learning?" The answer to this mostly comprehensible query turns out to be "no," if you can even believe it. Pablo speaks no English and doesn't know how to use a toilet, Barkevious is on a desk rapping about its penis, La-ah has birthed three welfare assets before turning 18 and Johnny is routinely attacked by his mongrel classmates for being part of the hated White minority. The rapid decline and fall of a dead jew-ruined nation combined with genetic determinism has laid waste to our "publik skools," but don't worry, there are still crusading White women (like in "Dangerous Minds!") whose unorthodox solutions to the predictable failure of the dark inferior are sure to fill the teeming alien hordes with a deep love of "giddin muh larn awn."

For the next five years, an Oregon high school diploma will be no guarantee that the student who earned it can read, write or do math at a high school level.

In fairness, this was already the case, but there's very few problems that can't be made worse by applying cultural marxist delusion to them. The already outrageously low standards are proving to be an embarrassment so they have to go.

Gov. Kate Brown had demurred earlier this summer regarding whether she supported the plan passed by the Legislature to drop the requirement that students demonstrate they have achieved those essential skills. But on July 14, the governor signed Senate Bill 744 into law.

I can't wait until the dusky idiots handed diplomas enter society and are affirmative actioned into positions of responsibility. Once they see we've completely given up, they're bound to start improving.

Through a spokesperson, the governor declined again Friday to comment on the law and why she supported suspending the proficiency requirements.

Why are you eliminating the most basic fundamentals of education? Please respond.

Brown’s decision was not public until recently, because her office did not hold a signing ceremony or issue a press release and the fact that the governor signed the bill was not entered into the legislative database until July 29, a departure from the normal practice of updating the public database the same day a bill is signed.

Wow, it's almost like they aren't proud of this suicidal idiocy and wanted to sneak it through. My free and open society with its fair and honest democratic process. Be sure to vote, slave. Where's your "covi-pass," you piece of garbage? Get back in your BlackRock pod, there's a deadly "zeta" variant. You're going to own nothing.

Isn't this sort of "racist?" We all know your typical Aleutian Islander, Crow Indian, la-teen-ex mystery grab bag and negro evolutionary dead-end are equal to Whites in every possible way.

“Leaders from those communities have advocated time and again for equitable graduation standards, along with expanded learning opportunities and supports,” Boyle wrote.

If everyone is a debased and ignorant scumbag we'll finally have "equity." This nightmare creature is calling other worthless "people of color" "yella" at a very high level of proficiency. Look out China, we comin' foe yew, nikka.

Lawmakers and the governor did not pass any major expansion of learning opportunities or supports for Black, Indigenous and students of color during this year’s legislative session.

Tomahawk class has been cancelled.

Democrats in the legislature overwhelmingly supported ending the longtime proficiency requirement, while Republicans criticized it as a lowering of academic standards. A couple lawmakers crossed party lines on the votes.

Jesters perform their hilarious routines in the court of the semitic Clown King.

Recommendations for new standards are due to the Legislature and Oregon Board of Education by September 2022.

No hurry. Take as much time as you need.

Much of the criticism of the graduation requirements was targeted at standardized tests. Yet Oregon, unlike many other states, did not require students to pass a particular standardized test or any test at all.

This standardized test is "racist" because the racial sewage performs poorly, just like they do on every measure of intelligence ever created. There is no standardized test? You're a "racist!"

To fulfill its English proficiency requirement Quantavious will be performing a "rap" called "Kill dem crakas." For math it will demonstrate how to convert the common units of illegal narcotics.

No notification ever went out regarding the governor’s signing of the graduation bill. That was because by the time legislative staff belatedly entered the information into the bill database on July 29, the software vendor had shut off bill updates to member of the media and the public who had requested them. They cut it off because of a July 21 system malfunction, said legislative information services Systems Architect Bill Sweeney.

The system has definitely malfunctioned. 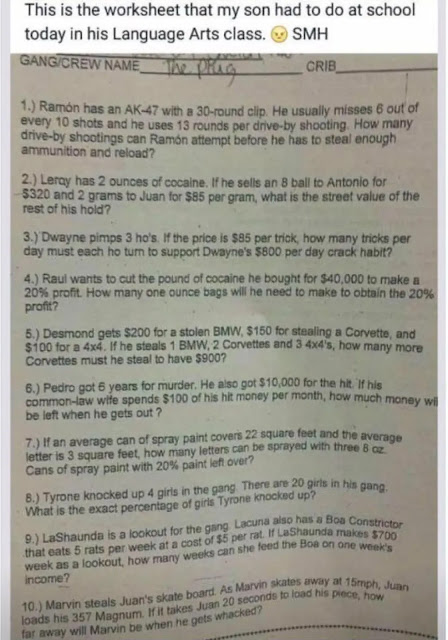