We must rescue the precious six million "Americans" still "trapped" in Afghanistan. This swarthy horde is full of unique special value and is ready to "enrich" your stale and boring small community where acid attacks and "40 years of systematic child rape the authorities ignored" are still relatively uncommon. Moe-ham-head here is an American, probably better at it than you, because it collaborated with our puppet government in a distant wasteland. After achieving our sacred mission of being fully and decisively beaten, we owe it to this good little "citizen" to settle its massive extended family in Utah or Wisconsin. This is who we are. And just think of the massive benefits we'll reap from opening the gates for moronic alien criminals. Just ask Swedenistan, they'll tell you!

A Somali migrant in Sweden who was arrested for violently assaulting numerous women justified his behavior by asserting that “white people are evil and racist.”

We're getting very close, if we're not already there, to a time when claiming the White victims were "racist" will be sufficient to drop all charges against the dark metastasis. Do we know for sure none of these women said the "En Word?" Yes, these horrific crimes look bad, but we have to consider if the evil White benefactors hurt the brittle feelings of an idiotic living fossil who invaded their dying nation.

Back in July, 23-year-old Mohammad (authorities are presumably hiding his surname) intercepted a woman visiting the Pallas gallery in central Borås by knocking her to the ground near an escalator.

The religion of peace. Moe is the raw material for democracy, full of "conservative" values. It's going to save your pension. Europe must be swamped with brown sewage to survive; a jew said so. The African all against all arrives in Scandinavia. From the leader in prosperity to the leader in violent rape in a single generation. All people are equal. Race is just "skin color." We must hide the surname of a totally worthless foreign looter. We finally have the "rape culture" the marxist jewesses used to shriek about when we were still healthy. The silence now coming from jew feminism is deafening.

According to FriaTider, the legal indictment then states that Mohammad took out his frustrations at “racism” by beating up several people, men and women, in the immediate area.

Free-range Eloi are battered. Is there even one Swedish man left who isn't a cowering gelatinous future victim living in mortal fear of being called names by a jewish enemy who wants him dead?

The police report states that Mohammad was very aggressive while being arrested and said that “white people are evil and racist” in an attempt to legitimize his violent behavior.

Whites are bad. There's no evidence, but trust me, I was kicked out of 109 countries. Here is your reward for kindness and weakness.

“He shouts and talks incoherently about the Holocaust and about how white people should die and that he should fuck and kill white people,” said one of the police officers who was present during the arrest.

Take the endless jewish propaganda against us, pour it into a 60 I.Q. primitive brain, stir vigorously and this is the end result. Ironically, this savage interpretation of the electronic synagogue's message is far more accurate than the delusional views about "diversity" and "tolerance" held by White leftists. The yid wants us raped and killed. This was always the goal.

In July 2020, Mohammad attacked another two women while also threatening to kill his female social workers, who he accused of being Nazis and racists.

Yew bee nawzee, beech. Become a "social worker," White women! Don't have children of your own and try to uplift dangerous inferiors. What could possibly go wrong?

“In a police interrogation, Mohammad announced that he “does not accept any accusations and that everything is due to racism,” according to the report.

The preternatural brilliance of an animal mind. This enemygrant figured everything out and now has a firm grasp on kosher reality with its child-demon understanding. Everything is "racist." We can't punish this vile creature.

Mohammad cannot be deported because he was given Swedish citizenship in 2015 despite committing numerous crimes.

“I and many others probably wonder why he has been allowed to remain in Sweden after his first crimes?” asked Joakim Lamotte.

As we highlighted earlier this year, Sweden has gone from being one of the safest countries in Europe to one of the most dangerous, thanks in large part to mass uncontrolled immigration.

Could jew-authored demographic replacement actually be bad? Really gets you thinking, let me tell you.

When veteran Swedish police investigator Peter Springare was asked about the demographics of those responsible for violent crimes, he didn’t mince his words.

Here's one of those horrible White bigots full of "hate." Somali humanoids are now allowed to rape and murder because you mentioned upsetting truths.

“Countries representing all the crimes this week: Iraq, Iraq, Turkey, Syria, Afghanistan, Somalia, Somalia, Syria again, Somalia, unknown, unknown country, Sweden. Half of the suspects, we can’t be sure because they don’t have any valid papers. Which in itself usually means that they’re lying about their nationality and identity.”

Immigration makes us strong. There is no such thing as Sweden or the White race. White Swedes are evil "racists." We need another million rape apes from the anus of Africa. 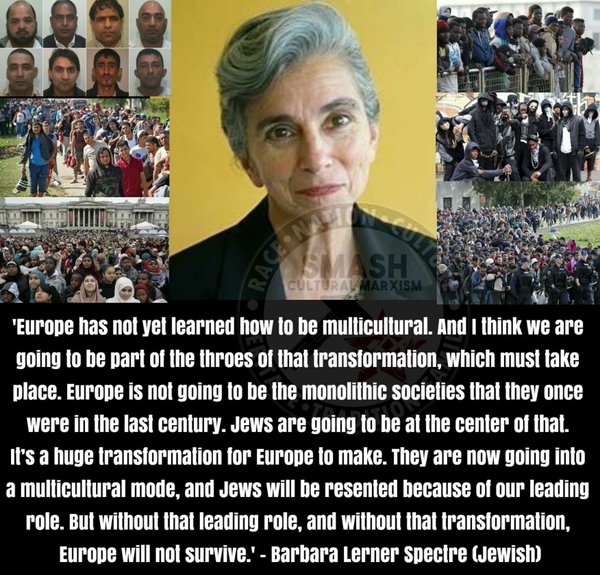