Is there a solution for the urban rot in my globalist kosher bodega? Of course, I'm very optimistic about the completely insane "infrastructure bill" somehow achieving some minor positives at the cost of stuffing our national dead body politic into the oven, but perhaps there's a better plan than scorched earth fiscal psychosis. I know, there probably isn't, but we must be open-minded when it comes to addressing the rapid collapse of Weimar America while ignoring the racial component at all cost. So far my best ideas include throwing a giant net over Chiraq or maybe holding the negro in place with giant magnets. I'll freely concede that these suggestions might be somewhat impractical, but they're still better than the staggering idiocy offered by the dyke tar alien from hell.

Chicago Mayor Lori Lightfoot is expected to announce an effort to sue local gangs as a way to curb rampant gun violence, according to a local affiliate report.

We're going to stop the drilling with nuisance lawsuits. A jewish problem needs a jewish solution, I guess. The local tribal war bands, which apparently operate with impunity right out in the open, now might be "served" by shlomo after Barkevious gets zapped while sitting in a car.

The Democratic mayor is expected to announce a plan that would allow city attorneys to take legal action against gang affiliated offenders, FOX 32 Chicago reported.

On tonight's episode of Judge Jew-dy the city of Chiraq is asking for a few large from hittahs after 100 humanoids were smoked over the weekend. I'd be absolutely shocked if this somehow fails.

"As a city we are using every tool to push back against the gangs that are leaving a trail of blood, death and misery in their wake," Lightfoot said, according to the report.

If successful in their legal efforts, the city could thwart gangs’ activities by seizing property, such as weapons, money and vehicles.

We bee comin foe yo azz-salt way-pawns, chedda an whips.

"What we are proposing is a tool in civil courts that gives us the opportunity to go after those gangs that are wreaking havoc," Lightfoot reportedly said, "and in particular, take away the profit motive from them by seizing assets that they have been able to purchase because of their violent activity in our neighborhoods."

We're going to reclaim the vacant lots you purchased with fiat currency earned by walking up to other nightmare animals in alleys and blasting. 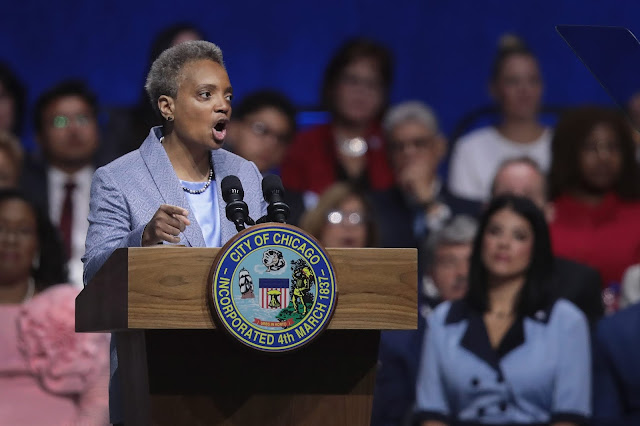 The Chicago Police Department has been outspoken about its struggle combating gun violence, especially at the hands of violent gangs, in recent months.

Speaking to reporters during a crime press conference on Monday, Counterterrorism Chief Ernest Cato said the department's would be "laser-focused" on gangs and narcotics in the city.

My patience is wearing thin.

So far this year, CPD has made 1,931 total arrests, and has recovered total narcotics having an estimated street value of $328 million.

Sixty people were shot in Chicago from 6 p.m. Friday through Sunday, including 11 children, according to police. One of the kids, 12, did not survive. And eight children were shot over the extended Labor Day weekend, including a 4-year-old boy who died days after he was struck by a bullet intended for someone else, police said.

This happened because we weren't sending in the lawyers.