As our great ally the jew prepares to dump Afghan aliens who bravely served in our latest national humiliation in the Whitest remaining areas, we may see a massive backlash of anti-semitism from the cattle (you and everyone you love). This evil reaction will express itself by narcotics-fueled apathy, "jay-sus would want this" spiritual leprosy and shocking hate crimes against moloch's fan club. Today's highly credible story from New Mexico (soon to be renamed "Mexico") is one example of this gathering storm. We need a lot fewer rights and a lot more foreign invasion. Our precious freedom, as expressed through mindless and faceless brown slaves promised by the demonic talmud, is in danger.

Police in Santa Fe are trying to determine who spray-painted a swastika on a wall outside an apartment where a Jewish man lives, according to multiple sources.

Good thing no actual real crimes are occurring, because otherwise this would look like a grotesque waste of public resources on an obvious fraud. Somehow the "not-sees" found out where the poisonous mushroom was living and then vandalized a wall within a short walk of the yid nest. This is every bit as legitimate as the fire pits and the electric belts which killed six million precious merchants during Europe's Second Jew-Assisted Suicide Attempt.

Jeff Hornstein, 58, said he and his wife noticed the swastika outside their home as they returned from dinner.

...and such small portions! Oy vey, the monsters are here! I don't believe in g*d anymore, not after this horror.

He commented, saying, “I came forward because I felt that I had to stand up to hate, ignorance, and cowardice."

Wow. What a hero. Are you hiding a spray can behind your back, shlomo?

"It's not something I would really expect in Santa Fe,” said a neighbor who lives down the street. “And it's a little too close for my comfort. It's frightening."

It's really not something that happens here. It's almost like it's a cynical hoax.

Hornstein, an ESL (English as a Second Language) teacher who works with the immigrant community, filed a report with the police and the Anti-Defamation League.

ESL meets EST. It's just a weird coincidence the poisonous mushroom was a professional subversive working for the cause of White genocide.

Excuse me, good sir. My name is Sherlock Holmes and I am a consulting detective of no small fame. I overheard your predicament and am willing to offer my services. Would you believe I've already solved your case?

“I can’t convince myself it is a coincidence,” Hornstein said.

You wouldn't believe how hard that circle was to draw and I almost made the hate symbol correctly and it would be a shame if my efforts were just immediately erased.

A criminal organization that tried to blame a negro dullard for the rape and murder of an innocent girl by a jewish sweat shop owner is on the case.

In May, a University of New Mexico student was targeted due to his Jewish identity and assaulted by a group of individuals at a party. 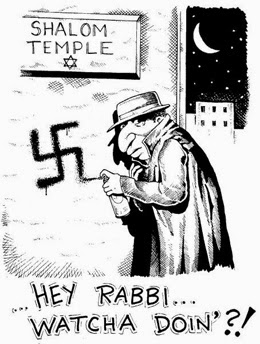