As our ancestral homeland commits semitic suicide, we can take solace in the awesome power of muh constitution, which will protect us and stand forever, just like all our physical monuments. Our enemies are sure to respect the stern warnings on yellow toilet paper written in the distant past by evil "racists." Once I explain to the mongrel slave soldiers how lining us up against a wall and gunning us down for being White is actually a violation of the due process promised in the Bill of Rights I'm sure I'll be fine. Yes, this magical document is going to stop all the lunacy which currently dominates every facet of our society. You might want to avoid reading it, though. I contains upsetting language that might remind you of the time before our national psychotic break and you really need to forget about that. Where's your "covi-pass," you scum? It's time for "booster shot" number ten. I will put a round in you.

The National Archives Records Administration placed a “harmful content” warning on the Constitution, labeling the governing document of the United States as “harmful or difficult to view.”

There is a shocking lack of worship of the negro and the anus, our wise jewish overlords aren't properly praised and you might get crazy ideas about individual rights. Skip that one, goyim. Your fragile feelings might be hurt.

The warning applies to all documents across the Archives’ cataloged website, including the Bill of Rights and the Declaration of Independence.

If you think those are bad, wait until you see the Immigration Act of 1790.

“NARA’s records span the history of the United States, and it is our charge to preserve and make available these historical records,” the administration said in a statement. “As a result, some of the materials presented here may reflect outdated, biased, offensive, and possibly violent views and opinions. In addition, some of the materials may relate to violent or graphic events and are preserved for their historical significance.”

The NARA, which is responsible for preserving and protecting documentation of American heritage, noted that so-called harmful historical documents could “reflect racist, sexist, ableist, misogynistic/misogynoir, and xenophobic opinions and attitudes; be discriminatory towards or exclude diverse views on sexuality, gender, religion, and more,” and “include graphic content of historical events such as violent death, medical procedures, crime, wars/terrorist acts, natural disasters and more.”

The Founding Fathers noticed basic reality. Shoving building materials up your rectum isn't protected by 18th Century jurisprudence for some reason. There are references to scary events that might make you cry. It's deeply "misogynoir" (???) and might encourage you to resist illegitimate tyranny, like our current jew-controlled junta.

Along with committing to diversity and equity, the NARA said it would “[work] in conjunction with diverse communities, [and] seek to balance the preservation of this history with sensitivity to how these materials are presented to and perceived by users.”

It made a crippled sodomite mystery meat upset. Into the fire it goes.

Dem fuggin bill-dings bee stuck-shores aw races. We are not a serious country.

The task force also pushed to include trigger warnings around displays of the Declaration of Independence, the Constitution, and the Bill of Rights, which are all in the rotunda.

Worship your stomach and your genitals. Bow down to demonic evil. Liberty is a selfish and "racist" idea promoted by "Confederates." Remember when young people were rebellious and idealistic? Yeah, me neither.

The warning is a blanket statement atop all documents in the archived catalogs that links to a “Statement on Potentially Harmful Content.”

It will be replaced with an even better "blanket" statement: White Man Bad. 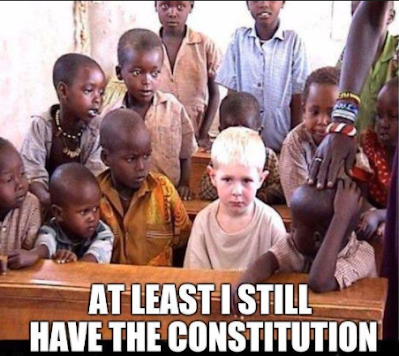