July 27, 2012
The Negro is not a sun-tanned White. Anyone with eyes can easily make that determination. Nor is their behavior at all compatible with White civilization. Again, a simple cursory examination of the evidence is enough. No honest person would suggest that these two statements are in error. However, dishonest people with specific communist agendas like to do so. We're told it's "stereotypes" and "poverty" and "just the color of the skin." Reality disagrees.

So do the latest scientific findings.

The human family tree just got another — mysterious — branch, an African “sister species” to the heavy-browed Neanderthals that once roamed Europe.

While no fossilized bones have been found from these enigmatic people, they did leave a calling card in present-day Africans: snippets of foreign DNA.

These genetic leftovers do not resemble DNA from any modern-day humans. The foreign DNA also does not resemble Neanderthal DNA, which shows up in the DNA of some modern-day Europeans, Akey said. That means the newly identified DNA came from an unknown group.

We already knew that White people have a genetic heritage completely separate from the negro. Now we get some idea of just how wide the gulf really is with the discovery of "foreign" DNA in the African. We're really not the same. Science has proven it beyond any reasonable doubt.

Perhaps this foreign DNA is the source of traits like low intelligence, lack of future orientation and mindless violence, to say nothing of the brow ridges, muzzles, sloping foreheads and other simian features observed on your typical negro. 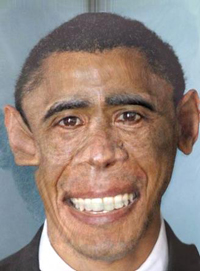 The marxist correct have to be squirming at this discovery, which proves beyond any doubt that the negro is a failed, alien branch of humanity that has only the most superficial relationship to Whites and Asians. Obviously, these living fossils don't belong in our nations and this is one of the reasons we need White Nationalism.
Cultural Marxism Debunked Foreign DNA Genetic Evidence Race is More Than Skin Color Sister Species We're Not Equal