November 09, 2012
One moment it was the typical liberal script: a smug, self-righteous liberal White woman, the kind that voted for rapid decline over moderate decline, explaining the latest minority-caused tax leveled at Whites. The next moment the negroes attacked. The dark reality intruded on the communist fantasy. It was time to flee to the Mercedes-Benz, time to pray that negro malfunction wouldn't end the gravy train of selling out White America.

Reporter Anne Makovec and cameraman Gregg Welk were on the air shortly after noon Wednesday outside Oakland Technical High School near the corner of 42nd Street and Broadway. They were at the school to do a story on the passage of Proposition 30, the tax measure preventing deep cuts to education.

Certainly this new tax will be the magic bullet that alchemizes negro thugs into good little citizens, unlike the countless similar taxes that came before. Whites pay, and pay, and pay. In money, in blood. Somehow that 15 point I.Q. disparity never goes away. We keep paying.

As Makovec was finishing her report, police said, five men rushed up and grabbed a $6,000 camera from the tripod. Viewers saw the live picture being jarred and turned sideways for about two seconds. 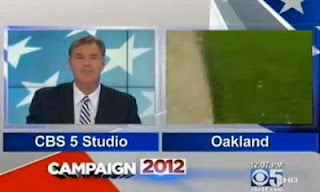 One of the assailants punched Welk in the mouth before the group fled in a Mercedes-Benz, which apparently was accompanied by a Lexus, police said. Welk declined treatment by paramedics but saw his doctor.

A brown fist to the face, followed by a quick retreat to a luxury automobile purchased with the rewards of treason. Will it ever occur to the nation-wreckers that they won't be safe either when this nation becomes another Africa/Latin America hybrid?

Sources, however, said all KPIX crews covering stories in Oakland would be accompanied by security guards, day or night, effective immediately.

The dinosaur media must protect itself from the negro and la-teen-oh violence that they play a significant role in inciting. There are no "good Whites" in the eyes of "minorities." Just potential victims.

The incident comes amid a series of robberies in which media representatives have been victims throughout Oakland, often in broad daylight.

The death of America. A future wasteland of violent brown monsters and rich elites trying to control them.

Get ready to pay more taxes, Whitey, in the latest failed attempt to change the leopard's spots. Get ready for daylight crime. Run to your Lexus, if you have one. If not, I guess you're out of luck.
Alchemizing Negroes into Whites Anne Makovec Dinosaur Media Gregg Welk KPIX Lexus Mercedes Mob Rob Oakland Pathology of the American Negro Tax and Spend