No Prison Time For "Bored" Negroes Who Killed a White Man

May 02, 2014
It happened in August, 2012. I remember it like it was yesterday. Six "teens." Boredom. A "random" attack on the first available White man. The victim had no health insurance, had lost his factory job so a few wealthy jew bastards could become slightly more wealthy. When I reported this horrific attack I mentioned that actual punishment was unlikely for the negroes. No prizes for getting that one right. The victim wasted away, never recovering from the physical and mental trauma of a racially motivated attack that happened because worthless brown animals weren't sufficiently entertained. He died about a year later, another forgotten victim of the undeclared, one-sided race war. Now it's finally over, with sentences for the killers that are a sick joke. It's now open season on Whites in the U.S.S.A.

Be armed. Be ready to act. Avoid the negro. The negro hates us, the kosher system wants us dead. It's up to us.

It's taken almost two years, but the case involving the teens who beat up a man because they were bored is finally over.

Another fair and speedy trial in the land of the fee and the home of the slave.

Thursday morning, a judge sentenced the final 16-year-old -- convicted in the beating of Pat Mahaney in North College Hill -- to probation and mental health treatment.

Yes, you read correctly. A negro that murdered a White man because there was nothing better to do is not going to do a single day in prison. This fully mature monster was probably tried as a "child" and given special treatment because the typical negro pathology was considered a "mental illness." Now it's free to ruin more White lives.

Judge Sylvia Hendon said the teen was the least culpable in the attack.

He only kicked him in the head a few times, as opposed to dozens.

Officials said six teenagers beat Mahaney in August 2012 until he lost consciousness and then continued until a neighbor called police.

They continued to attack a completely unconscious victim. If the neighbor hadn't "snitched" it might have gone on even longer. These things are not human. Even calling them animals seems like an insult to animals. This vile walking dog shit needs to be removed from White nations.

Mahaney died 11 months later from causes unrelated to the attack. 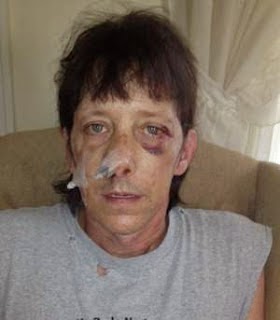 The teen didn't respond to Hendon's questions in court. "Hello, out there?" Hendon asked as she waved at the teen after he didn't answer her question.

A moronic piece of garbage that can't even answer a simple question. Pretending these monsters were our equals is the flat earth of our times, the State Religion propped up by endless lies and propaganda. This "teen" is a brainless, soulless creature that should have been put down. It never should have been anywhere near White people to begin with.

The teens involved have been sentenced to a variety of punishments because the case has been handled by two different judges.

The common denominator is the unbelievable miscarriage of justice that occurred. The rule of law is a joke in the U.S.S.A.

The first two teenagers got probation, had to write a book report and serve 10 days on a work detail.

Write a book report on why killing Whitey is wrong. This is not some tasteless parody. This is a scene from a dead nation, a stinking corpse being consumed by the maggots of "diversity" and prepared for the cleansing fire of the full collapse.

Two other teens had to complete a nine-month disciplinary program.

Maybe write "I will not kill Cracker Devils" on a blackboard a few dozen times.

"This court is supposed to rehabilitate children, not break them," Hendon said.

The stench from the bench. A fully physically mature negro that's as smart as it's going to get is a "child." No justice for Whites. Shut up and die, that's what our enemies want.

The teen apologized to Mahaney's family, but Mahaney's brother said he wasn't buying it.

"I be solly I done beet dat honky debil after he be all knocked out and sheet."

"No, I didn't think it was heartfelt. The grandmother, I do. But, him? He wasn't saying anything to anybody, not even the judge," Michael Mahaney said. "Pat's last year was hell on earth."

But remember, that ruined life and premature death was all "unrelated" according to the professional liars in the dinosaur media.

"I hope he does get a job and gets his life turned around. I think out of all of them, he does have hope," Michael Mahaney said.

Good boys, turning their life around. They kept beating the lifeless body of a man they attacked because he was White and they were bored. I don't know what more needs to be said.

90 I.Q. militarized Police won't protect you. The "races" justice system won't even punish the racially-fueled attacks. Summer is coming and with it more black pack attacks, more Knockout Game, more content of their character, more reasons why segregation and then removal are the only viable answers. If you're not prepared to protect yourself and your family you're going to become another forgotten victim, another boredom cure that was cast aside by a nation with spiritual syphilis.
Black Pack Attack Bored Teens Content of Their Character Eroding Rule of Law Knockout Game Negro Anti-Soul No Justice For Whites North College Hill Pat Mahaney Sylvia Hendon Undeclared Race War