May 12, 2015
A long war is ending in defeat. It's the war to control the negro, to somehow keep the same pathology that created the South Sudans of this world from overwhelming a White nation. In the final days of this doomed struggle we're being told it's wrong to try to stop the criminal animal from displaying the content of its character and our law enforcement is clearly taking this message to heart. No one wants to lose their place in the world over the actions of some "African American." Look the other way. Forget it, it's negro town.

A rookie officer, perhaps not knowing any better, attempted to control the rot under the new jewish rules of engagement and became a victim himself. Fortunately an armed bystander was there to stop the dindu nuffin gentle giant.

New information is coming out regarding the rookie Oklahoma City police officer who was beaten by a suspect with his own baton following a burglary on the northwest side of the metro.

The obvious question of why the officer didn't shoot the negro is going to be ignored by this article, but we all know the answer. We don't want another burning city. Negro privilege.

An armed witness may have been the only thing that kept that officer from a more serious beating, or worse.

Suffice it to say this story is not getting national attention. There won't be any "million" simian marches or speeches from racial con artists, no greasy tears on the electronic synagogue. This sort of story is what our enemy wants. A White officer nearly murdered by a worthless shit-colored savage. White lives don't matter.

The two suspects in the burglary, Tremaine and Jermaine Williams, are twin brothers. Police say Tremaine was already gone when they arrived, but Jermaine was there and when he saw the officers he took off on foot.

When they're not attacking or insisting on their innocence in broken English you get the Jesse Owens act. Typical negro behavior, as predictable as the sun rising.

Look at all the remorse. If you think these things are human you're insane.

During the chase the two officers became separated. Eller found himself alone when he caught up to Jermaine in a driveway of a nearby home and as he tried to place him under arrest, a fight ensued.

Hands up, don't shoot! Good job protecting that important black life, officer. We don't care if you die in the process.

During the struggle, Jermaine was able to take Eller's police baton and then proceeded to strike him over the head somewhere between six and 12 times.

Unarmed teen. Good boy, turning the life around. On the way to see Grandma. Aspiring neurosurgeon or rapper. Wouldn't hurt anyone. Ready to go to college. Brought joy and sunshine with him everywhere.

According to a report, that's when a witness nearby charged up with his weapon drawn and told Jermaine he would shoot him if he did not stop hitting Eller. That heroic witness has not been identified.

The reason you need to be armed. It might be up to you to save White police from negro attacks.

Both Tremaine and Jermaine Williams were eventually taken into custody and booked into the Oklahoma County jail Tuesday night.

Now the "races" justice system can administer some token punishment and get these worthless monsters back into society to cause more crime. Don't worry Whitey, you'll get the bill. In money and blood. 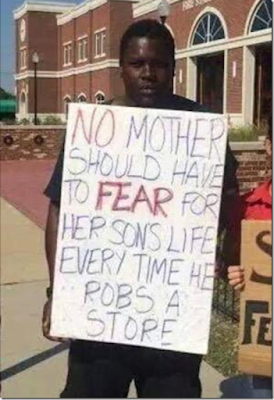