May 15, 2015
Cultural marxism is a mental illness. For our enemies it's the delusional belief that removing the only race in the entire world that shows tolerance and acceptance toward outsiders is somehow going to improve their lot in the world. Destroy White civilization and things will get better. Somehow. Just like in Sudan or Latin America. All against all, not a coffee-colored paradise, awaits. For Whites it's a suicidal insanity, pathological altruism raised to the level of self-negation. This sick self-hatred is endlessly pounded into us via the talmudvision, the criminal government, publik schmuels and kosher debt-generating colleges. The result is Whites calling for their own destruction, their deranged and pathetic ravings no different from what you'd hear out of the mentally ill.

A schizophrenic woman snuck up behind an Arlington Stop and Shop cashier and put a knife to his throat on Tuesday, according to police.

Just another scene from a dead nation, nothing to see here. Hold on, there's a lot more to this.

After her arrest, she allegedly told police, “I want black people to start an armed rebellion against white oppression.”

Institutions and "meds" or a a position in the mainstream dinosaur media? There's less of a difference between the human wreckage in these two areas than you might think. A mentally defective woman repeats marxist talking points while foaming at the mouth and menacing people with a knife. Get her a show on MSNBC. That or a restraint chair, whichever.

Elaine Koenig, 55, of Arlington, also said she only meant to call attention to her cause by making a scene, and never actually intended to harm anyone.

Yes, this lunatic is no different from the "activists" who stage phony hate crimes that could have happened or call for our cities to be burned in the name of "justice." It's fine because the end goal of White genocide always justifies the means. Give this nut-job room to destroy. 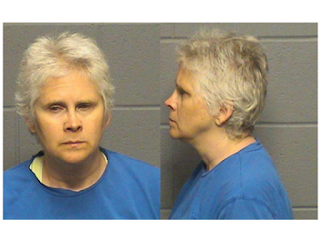 Her alleged intention to start a race war with violence bears eerie resemblance to the “Helter Skelter” end-times pseudo-prophecy of the infamous Manson Family, which inspired them to murder seven people in the late ‘60s in California.

It bears eerie resemblance to the "narratives" presented by our State Religion. Madness or the mainstream? It's getting very difficult to tell the difference.

However, as Koenig was only approximately 9 years old when Charles Manson’s disciples stormed the home of actress Sharon Tate in 1969, it is unlikely that there is any direct affiliation.

Hearing the exact same anti-White depravity on the electronic synagogue every night is the "direct affiliation" this article is very careful not to mention.

Koenig was yelling “War Against Race!” all the while, according to police.

The terminal illness of a dying nation. A broken mind parroting the words of a broken country.

Following her arrest, police were made aware of her history of schizophrenia.

We might never have guessed it otherwise. You're just an ordinary anti-White, maybe a little wilder than most, right? The only argument against White Nationalism is the argument of a schizophrenic. 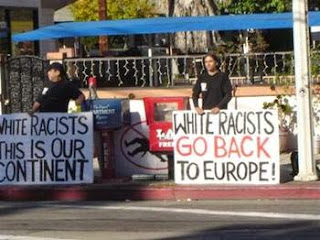