June 08, 2015
We should be seeing some improvement in the behavior of the American negro any day now. It's hard to imagine a more misplaced faith, a more delusional hope that flies in the face of everything we've observed since the brown outsiders were vomited on our shores from a jew slave ship. Decades of appeasement and spending, of running and dying, and here we are, stuck with the same predictable failure that is the invisible backpack worn by the negro. Just continue the failed policies our criminal leaders bleat, while reminding us that our massive and suicidal generosity is actually "races" and it's the fault of our White bodies. It's definitely time for that conversation on race, a conversation where phrases like "70 I.Q." and "failed race that needs to be removed" are finally spoken aloud.

Negro riots at the (c)rap concert, the content of their character, the reason all that spending and groveling isn't helping. The same predictable monkeyshines. 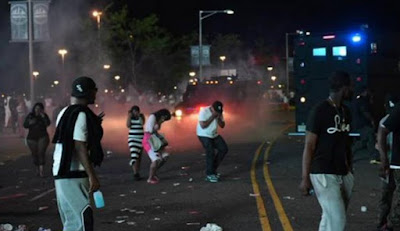 Tensions rose at MetLife Stadium after police closed the concert when crowds rushed a gate in an attempt "to illegally enter" the show around 7 p.m., police said. But the shutdown also kept out members of the crow who had bought tickets, creating an uproar.

Basic rules of behavior and civilization are, of course, "races." We be wantin' to see dat room to dee-stroy show and sheet. Hee-ah bee mah tick-att.

Several concertgoers chucked bottles at police and an armored police vehicle fired tear gas twice into the crowd near the MetLife gate.

Bottle chuckers. African savagery gets a modern veneer. The Whites must be crazy.

State police later said that hired security personnel at a stadium entrance “were confronted by crowds attempting to illegally enter the sold out Summer Jam concert by climbing over fences and forcing their way through security personnel.

Undocumented negroes, here for better (c)rap. Natural conservatives, the last, best hope of the Loser Party pull their shit-colored bodies over a fence. No one is illegal at the Summer Jam. Let's get rid of all laws, it's the right thing to do. 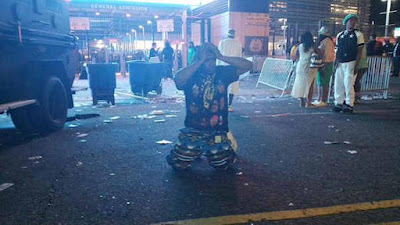 A New Jersey State Police spokesman said several people had been arrested at the concert and more troopers were deployed for back up.
Tyranny and anarchy battle in a dead nation. Deploy the police tanks, gas the simian monsters. This is a healthy democracy with a bright future.

"People were throwing bottles across the crowd," witness Janae Griffin, who drove up from Baltimore, told the Associated Press. "We got into a confrontation with a guy who was deliberately trying to vandalize a police car and was just making it worse of a situation than it needed to be."

Hot 97, the radio station that hosted the event said “a small number of people created an unsafe environment” after learning the event was sold out before state police dispersed the crowd.

It's always a tiny minority of negroes ruining everything. The average low I.Q. alien with foreign genetics is just like a White person, honest. 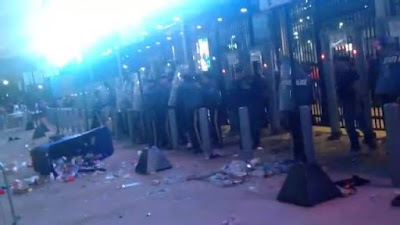 One woman wrote that she drove five hours to the show and found the gates already closed at 6:30 p.m. Crystal Clark said no official information was released to those waiting outside and instead rumors circulated.

Can we somehow blame this on "races" Whites and then get it into the memory hole before any uncomfortable questions are raised?

Thousand of fans poured into the Meadowlands sports complex for the concert, which featured Kendrick Lamar, Trey Songz and Big Sean. 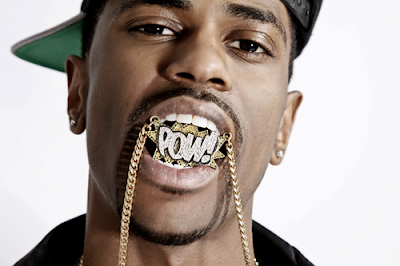 Kosher entertainment for the brown mass.

Even rapper 50 Cent, who performed alongside Chris Brown, said he faced tight security on his way in, writing on Instagram that he was searched as if his crew was "the Isis group."

Wow, even "50 Cent." Clearly more spending and dismantling of rights is needed, so that Mr. Cent and his "crew" won't be accurately judged.

The talk theme of the morning was remembering moments when "someone tried to mess up a good time."

Like the time a prosperous and sane White America turned its education, entertainment and government over to a tiny and wildly unrepresentative minority that hates us and then allowed the jew to transform our nation into a spiritual sewer.

He said Summer Jam has been going on for 23 years and acknowledged "there have been problems in the past," though he said there was "nothing as serious" as people throwing bottles at police.

The negro behavior is getting worse. Huh. How about that. Must be some crazy coincidence, keep paying those taxes.

"We can't allow the the actions of a few idiots to ruin a celebration of something we love," Darden said of his feelings on the issue.

Mostly good boys here, you know the words, sing it with me. 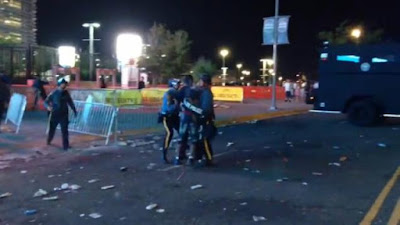