July 30, 2015
When different races, cultures and religions are forced together, or at least forced into a Balkanized patchwork, friction and lack of trust naturally follow. We must pretend we don't see this, because our State Religion is built on the lie of "multiculturalism," an idea that any sensible person could see was impractical from the start and now only a fool believes is something other than an abject failure. Of course, when these insane societal experiments end in predictable misery, bloodshed and burning cities it's entirely within the kosher plan. It was never intended to work. It was just an attack on Whites.

In Baltimore, or Bodymore, Murdaland as it's more commonly referred, we're getting a glimpse of the collapse to come. The police were told it was "races" to try to control the negro all against all. So they stopped trying. Now the "black bodies," the precious lives that matter so very much, pile up in the summer heat. It doesn't matter. The anti-White hay has been made, the damage to the dead body of our nation accomplished. The long night descends: no Whites, no rule of law, no hope.

If only "races" police were there to encourage Jesse Owens behavior, to shoot negroes with their hands up, to take away the oxygen from precious black lungs, everything would be fixed. The mind of the negro: devil and child. Come back evil hate-filled pigs...we dyin' hee-ah!

"A lot of elderly people are hostages here," he said. "They are afraid for their safety. I think that's a serious problem."

How to make Whitey come back with his cargo? Build a police station from sticks and cow shit? Rattle an amulet? Pray to the mighty sky-god Obongo? 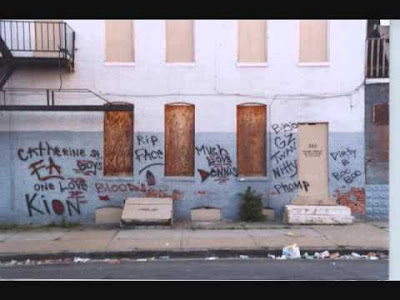 Must be White "races" vandalizing and scattering garbage.

Officers came to the block early Wednesday after a man was shot fatally in the back and another was shot in the leg.

The Baltimore Police might as well be renamed "Dead Negro Storage" now that they're not allowed to do anything but clean up after the character's content.


They were Baltimore's 40th, 41st and 42nd homicides this month, matching the total from May, the city's deadliest month in 25 years. It is the second time this year that the city has recorded more than 40 homicides in a month and only the fifth time in the past 45 years.

Huh. It's almost like attacking the rule of law has consequences. It's almost as if the negro is not compatible with a civilized society and requires a police state to keep it under control. No, can't be true, the television says it was "races" black officers. 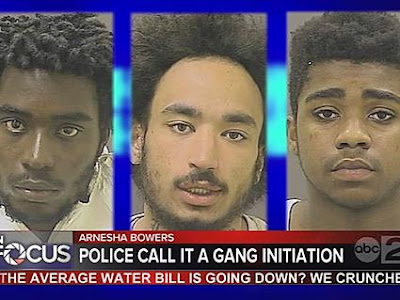 The face of the Baltimore collapse.

Baltimore police have reported 185 homicides in 2015, up 60 percent from this time last year.
Probably just some crazy coincidence. Hey, you can go to that stadium now and watch the negro and la-teen-oh baseball players! Just keep your windows rolled up and maybe ignore traffic signals.

The amazing insights of Mayor Space to Destroy. Police be nimble, police be quick. Get in, remove the no longer living fossil, get out. Let the tribal warfare rage, we'll find a way to blame Whites.


Speaking Wednesday at her weekly news conference, Rawlings-Blake said Davis is taking a "collaborative approach to reducing violence in our city."

What does that even mean? The only collaborators I see are the careerist White scumbags who pretend not to notice the typical negro malfunction so they can keep getting paid. 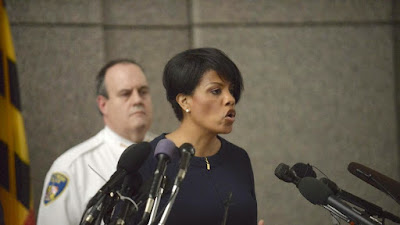 The magic negress that failed.

"We're still in a fight," Rawlings-Blake said. "There is still much too much violence on our streets. ... We've got a much more nimble department when it comes to identifying suspects when we've had these incidents."

Words bereft of all meaning. Do we need a department full of "southern speed" that can catch the Jesse Owens imitators? Officers that see the pathology and nimbly avoid doing anything because they could get into trouble? More of the same failure?


In the killing early Wednesday, officers called to the first block of N. Abington Ave., a residential street with small yards and porches, arrived shortly after 2 a.m. to find a man shot in the back, police said. He was taken to a hospital, where he died.


Smiley said a lack of opportunities for children in the city has contributed to the violence.

Over fifty years of spending and appeasement just wasn't enough. Keep pouring resources into a violent and moronic race, it's sure to pay off eventually. Your big reward for all you've already done is "Dey ain bee no opp-tune-tees foe dee chirren." 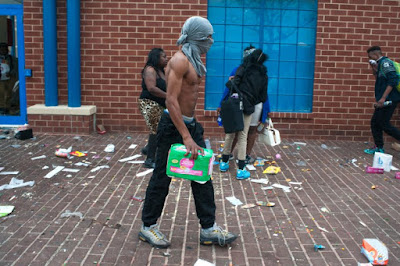 Injustice and privilege caused this.


On Wednesday evening, a 40-year-old man was shot to death on the porch of a vacant home in the 2200 block of Annapolis Road in Westport, police said.

Negro blasted while sitting on the porch of a board-up, presumably while smoking menthol cigarettes and eating chicken.


"He was a good person," the woman said. She did not want to be identified for fear of being targeted herself.

At the end of the block, the Belmont Liquor store was opening for the day. Owner Myong Lee said she has never had any problems there.

See, everything is fine. An oriental ant-person selling malt beverages to simian monsters. I'm proud to be an American, where at least I know I'm free.


"This area of people are good," Lee said as she greeted customers from behind Plexiglas.

"Garbage people good, buy the poison," she said from behind reinforced steel.


"It ain't no worse than the rest of Baltimore," said Van Harvey, a mechanic who works at Holiday's Automotive.

"There is only so much they can do," he said. "The rest is on the neighborhood." 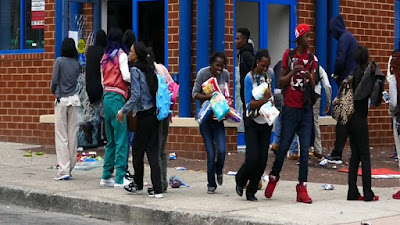