July 27, 2015
In the winter of 1939 a massive army representing the interests of jewish communism invaded Finland. Against all odds the Finns were able to resist this invasion and somehow survive in the face of an overwhelming kosher attack. Today, the same battle is playing out. The jew is more subtle now, replacing tanks and guns with banking, the media and the useful idiot, exchanging carpet bombing campaigns for name-calling and attacks on people's personal lives. Without firing a single shot this kosher dark winter has settled across Western Europe and it has now become a contest to see which formerly White nation can sink the lowest, can disgrace their heritage the most to earn the insincere approval of two-legged devils.

Finland is still fighting. The spiritual successors to the snipers who hunted Soviets in frozen forests are now battling the new face of the same demonic enemy. They are resisting the open grave of "multiculturalism," the horrific future of uncomprehending and violent dark faces picking through ruins.

The leader of the populist Finns Party has so far remained silent after a prominent MP called on his followers to "fight until the end" against the “nightmare called multiculturalism".

We will fight to the last against this jewish nightmare. White nations for Whites. No White genocide. No invasion of cultural, religious and genetic aliens whose only objective is to loot and kill. No more fear of being called a heretic by the State Religion. Battle the rot. Battle the jew.

Olli Immonen, member of parliament for the northern Finnish town of Oulu, posted his remarks in English on Friday night on Facebook and on the website of the nationalist organisation Suomen Sisu, of which he is the chair.

The solution is White Nationalism. With our own nations we can protect the brown horde from our horrible "racism" and oppression by keeping them out. It sure is strange how everyone wants into White countries, despite how bad we are according to g*d's chosen.

The MP, an outspoken opponent of immigration who on his website describes the need to fight the “Islamification” of Finland, predicted in his post “'The ugly bubble that our enemies live in will soon enough burst into a million little pieces.” He added that “We will fight until the end for our homeland and one true Finnish nation.”

I call it the coming collapse. The center can not hold, the productive and law-abiding White population can't absorb an endless tide of indolent and criminal third world sewage. When the ugly bubble bursts, when the hand-outs and cathode ray Circus Maximus fail to suppress the natural savagery of the invader, when the kosher noose we put around our own necks tightens we'll realize that surrendering our homelands was madness, but it will be too late.

The remarks drew widespread condemnation from other politicians, who accused him of inciting hatred.

For fear of the jew. Careerists scumbags purchased dirt-cheap by the traveling merchant rush to the defense of the rot. It must be "hate!" Put him in jail!

However the 29-year-old's own party leader, Timo Soini, who is also the country's foreign minister, has so far been unavailable for comment.

Better check and make sure he wasn't murdered by a muslim mob.


The leader of the Finns Party parliamentary group, Sampo Terho, also refused to be drawn on Immonen’s remarks. “I won’t comment beyond saying that these are one member’s personal views,” he told the news service STT.

"We're about to be placed on history's ash heap, so let's just keep sucking on the sanctimony shotgun."

Immonen's post comes a few weeks after the MP was given 'stern words' by his party superiors for posting a photograph of himself posing alongside members of a Neo-Nazi group.


A number of members who have made racist or homophobic comments have in the past been allowed to continue in the party, including the Helsinki councilor Olli Sademies, whose recent call for the forced sterilisation of African immigrants was dismissed by the party’s Helsinki group chair as “nonsense.”

Crime speech going unpunished? Oy, another holohoax with sixteen wobblezillion up the chimney! Also, the sterilization plan is a bad one. Deportation is the solution.


Timo Soini has only ejected one MP, James Hirvisaari, from the party, after he brought a neo Nazi as a guest into parliament and posed for a photo in which the guest performed a Nazi salute.

Don't worry, we're still punishing examples of societal health. Are there punishments for promoting the same jewish communism that tried to conquer their nation not so long ago? The answer is "No, you evil goyim, of course not."

Responding to Immonen’s latest comments, Åbo Akademi professor of politics Kimmo Grönlund told the news agency STT on Saturday that he finds it unbelievable that a member of parliament belonging to a governing party could be calling for a fight against multiculturalism.

"I can't believe someone wants to resist the Red Army invasion. We can't win! Besides it's immoral and wrong." The traitor within, the collaborator with the satanic enemy.


”It’s strange if someone is allowed to remain in the parliamentary Finns Party while expounding these views,” Grönlund said.

Twenty years in a gulag should be the standard punishment for this Wrong Think.


Immonen insisted he stands by his comments, and dismissed Grönlund’s criticism. “If he’d like limits on free speech and the silencing of political views different from his own, he could move to somewhere like Sweden,” Immonen wrote in a further Facebook post. 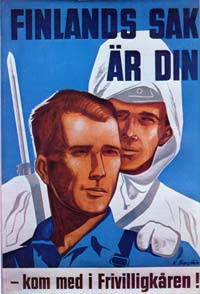