How Much Damage Can They Cause?

July 01, 2015
The American negro has been given every possible opportunity to approximate the minimum levels of civilized behavior by long-suffering and unbelievably accommodating Whites. The hand-outs, the special preferences, the stripping away of our culture and heritage because it's "races" and makes little Barkevious cry, the groveling apologies and pathetic appeasement, the wasted money and shed blood has resulted in the same predictable genetic failure one would expect from a failed race full of foreign genetic material. Our thanks for playing the kosher equality con game is endless pathology and open hatred from savage animals. "We can fix the negro" is no longer a defensible position. They need to be removed, along with the jew that unleashed them.

Surveillance video of a wee-hours ruckus at a Macon Wal-Mart on Sunday shows a teenager race inside flashing gang signs ahead of a mob of four dozen or so people who burst in and smashed merchandise.

Folksy down-home Georgia reporting meets the Jew York Slime style handbook. Those wacky and innocent teens and their little pranks. You were young once, right? I'm sure making "gang signs," gathering in mobs and putting businesses on tilt was a normal part of your youth. This is not societal collapse, no sir.

The commotion, which caused an estimated $2,000 in damage, appears to have been planned.

The negro Manhattan Project. "We gwine bust up dis sto. Get all yo niggas."

Some in the crowd also snatched a man, apparently a shopper at the Zebulon Road store, from a motorized shopping cart and dragged him to the floor, Bibb County sheriff’s officials said Monday.

The content of their character. You do not want to be weak or vulnerable around a black pack. You need to be armed. 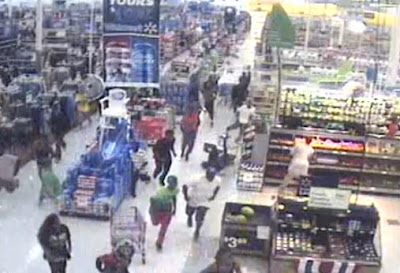 The vandals, said to number between 40 and 50, sprinted down the store’s main aisle about 1:50 a.m. Sunday, “destroying merchandise displays and items,” a sheriff’s deputy’s report of the incident noted.

The negro experience in America in microcosm. They ruin anything they get their paws on.
When sheriff’s deputies got there, the crowd “began to flee into many different vehicles and leave the scene,” the report said.

Now to pull a Jesse Owens while 90 I.Q. police afraid to confront the rot for fear of the jew do nothing. Let me guess, "no arrests were made."

The teenager seen leading the rushing horde of young men and women told a Wal-Mart employee “that this was a planned event ... to see how much damage they could cause,” the sheriff’s report said.

If you want a good idea of how much damage they can cause visit Detroit. Or Baltimore. Or St. Louis. Or Paris. Or...

The teen, identified as 17-year-old Kharron Nathan Green, of Ashton Drive in northwest Bibb County, was arrested when he returned to the store to retrieve his cellphone.

The mind of the "teen" criminal. This moronic animal returned to a crime scene and even our "races" "five oh" couldn't screw this one up. Now to have this creature read a few pages from "Roots" and write one paragraph on why killing Whitey and destroying civilization be bad, yo. 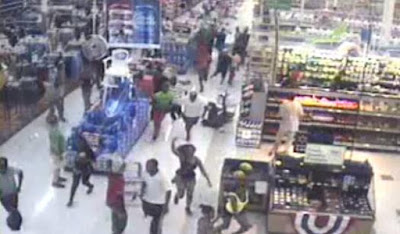 How can we blame this on Whites?

LOL. I'm sure it was communicated this articulately with superb grammar and diction. Certainly not some alien piece of dog shit screaming about how it "dindu nuffin" over and over.

He refused to name others in the crowd, but according to the report said they had all come from a party on the city’s south side.

Good job not snitching. Maybe next time visit a swimming pool or cigar store instead.

“Hopefully we can identify the others,” Sheriff David Davis said Monday. “Hopefully it’s not a pattern of behavior.”

They appear to be a bunch of brown blobs. As for as this not being a "pattern," you're in pretty deep denial if you don't think this is typical negro behavior. That or a careerist scumbag with a badge and a sub-average intelligence quotient.

“Due to the lateness of the hour,” he said, “I don’t know that they were going to be going to church the next morning.”

Whoa, let's not be "races." I'm sure these violent and destructive outsiders were spreading the message of Christ that day, on their way to Grandma, gentle beings full of goodness and light, about to go to college, turning that life around, future rappers, etc. 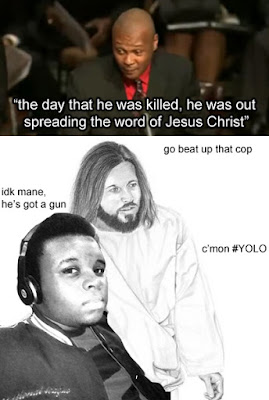