July 14, 2015
A typical weekend in Rahm Emmanuel's kosher Chicago plantation creates a pile of dead negroes and la-teen-ohs, victims of low intelligence, poor impulse control, lack of future orientation, propensity toward violence and the general malfunction that plagues these lower races. The reaction from the jews and careerists allegedly governing this Midwestern war zone is predictable: more needs to be done, White racism caused this, maybe more spending. Naturally this solves nothing and the predictable failure of Crab Grass Americans continues.

Maybe more White guilt will stop Barkevious from getting shot while sitting in a car? This seems to be the plan, as it's time, again, to honor the innocent dark lamb who spread the word of Christ by attacking a Hindu in furtherance of theft and then left this veil of tears impersonating a pile of shit with clothes loosely draped over it in the center of a street, the same place this animal loved to walk, going to see grandma. Your average White talmudvision addict has no idea who Pat Mahaney was, but we must all continue to hear the fictional saga of the gentle giant that didn't do [anything] and was about to go to college.

A new art exhibit about the Michael Brown police shooting in Ferguson is on display in Chicago.

Here's your big chance to prove you're not "races" for the thousandth time, Chicago Whites! Maybe this time the jewish enemy that wants you dead will say "That's enough groveling goy. We are finally content with the amount of pathetic abasement you've performed." Yes, this might be the crowning moment where your cowardice and ancestral treason is finally rewarded. That or you might experience a black pack attack or the knockout game courtesy of Chiraq animals, whichever. Good luck.

The piece features a life-size portrayal of Michael Brown after he was killed last year in Ferguson.

When the holohoax museum isn't enough, now you can see a cultural marxist re-creation of the gentle giant that couldn't play football because it was too rough and liked to put "racks" in its mouth and point guns. Please have your credit card ready. 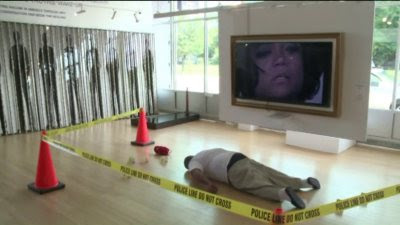 Too bad that "planking" fad is over.

It also includes a black statue of liberty, and a noose dangling from a neon sign.

The amazing "art" created by the 85 I.Q. negro mind. Vaguely coherent symbolism suggestive of national rot. The only message you can take away from this is the negro needs to be removed.

The artist is a white woman from New Orleans.

Wait, it's not a negro! Something tells me this "White" woman might be from that very special group that always seems to be behind this sort of thing. 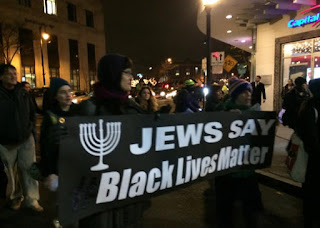 She says it represents white privilege in America and how it negatively affects the black community.

It represents yet another deceitful jewish attack. It's your fault a criminal negro got shot. Pay us more shekels, get on your hands and knees and beg for forgiveness from the State Religion. Don't even think of having children. Die. 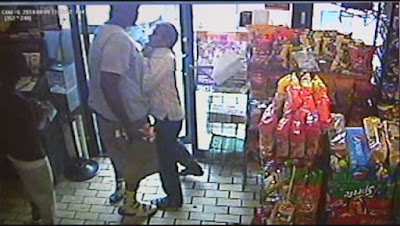