His Lie is Marching On

August 10, 2015
More always needs to be done. What more can be done for the American negro, though? We give them hand-outs, preferences and special treatment at every turn. We ignore their criminality and idiocy and paint a highly dishonest flattering picture in our kosher entertainment. Even the mildest criticism of this failed race can ruin a person, can bring down the full wrath of our State Religion, the synagogue of satan. It's not enough. It's never enough. The new "civil rights" frontier is the right to attack police officers, the right to steal, the right to burn and destroy. Punishing the typical negro pathology is "races." We must free them from even the most modest constraints of a civilized society and then somehow control the all against all that will naturally follow. Every possible right and not a single responsibility, this is the end game of our pathetic negro appeasement.

In Missouri it was time to celebrate the death of a worthless criminal the only way the negro knows how: with wailing and howling, gun shots and destruction. What began as jewish propaganda designed to humiliate rather than convince has become an article of faith for the dark animal. The truth is no defense. Whites must die, the civilization we built must be torn down, all in the name of failed attempts to placate an evolutionary dead end.

A friend of Michael Brown is in a 'critical, unstable condition' after being shot by police when he used a stolen handgun to fire on officers during a protest to mark the one-year anniversary of the 18-year-old's controversial death.

The content of their character. The good friend of the cigar thief tries to reunite himself with his good boy pal in hell. I'm sure the stolen gun will transform itself into a sandwich in eye witness statements, presumably complete with a receipt proving it was purchased legitimately and not strong-armed from some hindu. 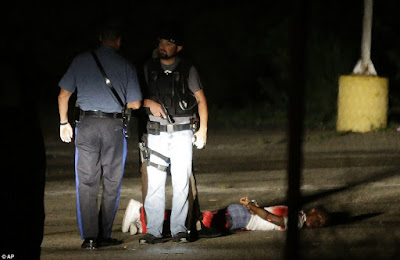 The next manufactured outrage?

He added that the man approached the officers, who were in an unmarked police car and opened fire. The officers returned fire from inside the vehicle. They then pursued the man on foot. The chief said the man again fired on the officers and all four fired back.
Jungle animals "opening fire" on whatever forces of order remain. Here's what your groveling purchased, here's the improvement in negro behavior we were promised for over fifty years. What is this creature doing in a White nation?

The suspect has been identified as 18-year-old Tyrone Harris Junior by his father, who revealed that his son was a 'real close' school friend of the late Michael Brown. 'We think there's a lot more to this than what's being said,' Harris Senior was quoted as saying in local media reports.

Yeah, I'm sure there's a lot more to this story. We didn't even mention how a brown turd who fired on officers with an illegally acquired handgun was actually a good boy, about to go to college, so gentle he couldn't play contact sports, loved animals and babies, turning the life around, rarely put wads of currency in his mouth and was a future chemist, forest ranger or rapper. Come on dinosaur media, get on this. 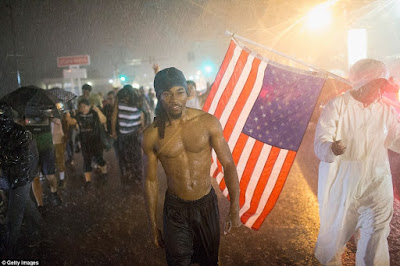 The savage monster sure loves the U.S.S.A.

Footage shot by protester Tony Rice, who was live-tweeting near a McDonald's under the Twitter name @search4swag, showed a black man lying face down on the floor with his hands cuffed behind his back and a large blood stain on his torso. Two police officers can be seen standing over him with their guns drawn but do not assist him.

From predator to prey, the negro melts like summer snow. One moment trying to shoot the White debil, the next pulling a Jesse Owens, and finally the usual "We dyin' hee-ah!" When the collapse comes they will destroy themselves. 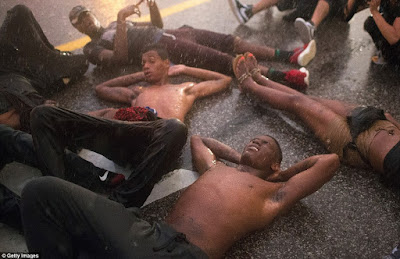 We be dying, come back Whitey!

The situation began to escalate just after 10pm when a Ferguson police officer told the protesters on a megaphone: 'Remaining in the street is a violation of law. You must move onto the sidewalk or be subject to arrest'.

Our god-given right to walk down the center of a street comes under attack. "You must obey the law even if you don't want to." That's becoming a pretty radical idea in today's U.S.S.A. Next you'll try telling the la-teen-oh invader that they have to leave. It's all "races," of course. 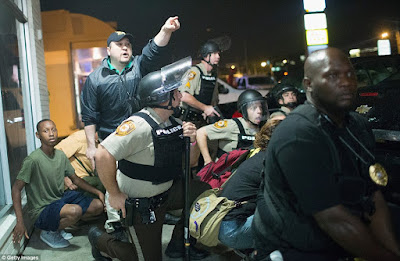 Once more into the African breach.

Police put on helmets and riot shields and formed a line. Protesters walked up and down the line saying: 'F*** you' to every officer until the shots rang out.
The successful integration of our multicultural, prosperous and high trust society is so close I can practically taste it.

Paul Hampel, a reporter with the St Louis Post Dispatch, was beaten up and robbed. He had blood coming down the right side of his face and asked other journalists for a phone to call his wife.

In another looting incident, rioters smashed the glass front door of a beauty store on West Florissant Avenue and tried to get into other shops on the same strip.

What better way to honor the memory of someone who loved to steal. 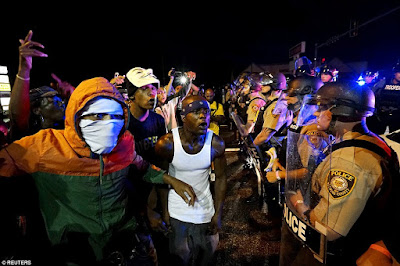 A group of a dozen youths in their early 20s were seen running away as alarms rang out.

Look at that boy run! Get him a full-ride scholarship at a University and plenty of access to our White daughters.

Police officers in cars and SUVs surrounded Bowen Beauty Supply, which had been smashed, as well as Ferguson Laundry, the Nail Trap nail salon, Ferguson Burger restaurant and another beauty store.

Negresses be puttin' on dem riot nails in dee trap an sheet. 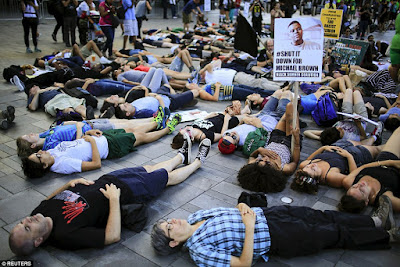 Elsewhere, Whites were trying to prove they weren't "races."

Before the looting took place around 9pm, protesters had walked up and down West Florissant Avenue holding their arms up in the rain shouting, 'Fight back, shoot back' and 'No justice, no peace'.
Electing that communist mulatto has sure done wonders for race relations. It's almost as if the more we give the worse they get, but that can't be true. Let's keep bowing down to 70 I.Q. animals.

Writing on Twitter Anthony French, a city Alderman whose ward covers Ferguson, branded the thieves as 'opportunistic criminals (who) used the cover of rain'. He called them 'pathetic and disappointing'.

Pathetic, yes. Disappointing? No, this is pretty much what we expect from the negro.

The group began their silence at 12:02pm, the time Brown was killed, for a length of time that symbolized the 4 hours that his body lay in the street after he was killed. Two doves were released at the end.

"That bee enough o' dat dove sheet. Tayme to get da loot on." 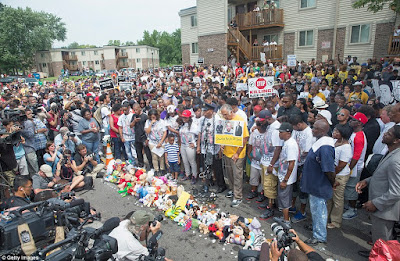 The sacred pile of garbage.

A grand jury and the U.S. Department of Justice declined to prosecute Wilson, who resigned in November, but the shooting touched off a national 'Black Lives Matter' movement.

Stupid old physical evidence ruined it, but the truth never mattered and the goal was always to burn and destroy anyways.

He had thanked supporters before the march for not allowing what happened to his son to be 'swept under the carpet.'

Because the dinosaur media barely covered this story. Wait, my mistake. I was thinking of something else. 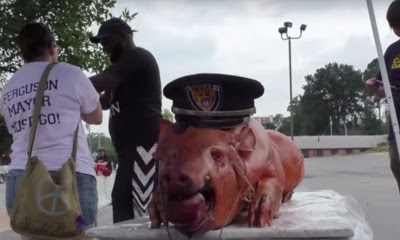