August 24, 2015
The city of Dresden was the site of a holocaust in the last century. One that actually happened, that is. Jew-controlled criminals rained down fire on defenseless civilians, a sweet savor to the satanic evil they were serving. This event is now the answer to a trivia question, it's just dead Whites after all and besides they were evil nawrtzee women and children that deserved it. Jump forward to the present day and Dresden is still under attack, only now the kosher flames have been replaced by carpet bombing the two-legged biological weapon, the foreign invader here to kill, rape and loot. Once again, the city is largely defenseless and unprepared for this new atrocity. A handful of "extremists" have said rude words and we must condemn them, just as we might have condemned the one German who tried to shoot the bombers of the Allied golem, assuming such a man even existed.

The German police planned to step up security measures in a small town outside Dresden on Sunday after two nights of sometimes violent demonstrations by right-wing extremists near a temporary shelter for refugees.

If you want your own nation, if you want to survive as a people, if you don't want to see your daughter raped, you're on the wrong side of history and are clearly a not-see and a "hater." Let in the human sewage, what could possibly go wrong?

Although the situation appeared to have calmed, the outcry earlier in the weekend illustrated the challenges that the authorities face as Germany absorbs an influx of people fleeing civil war in Syria, as well as other troubled places like Afghanistan and North Africa.

Absorb this demographic oil spill, Germany. I'm sure the fresh White towel will still be clean and pristine after that process is over. Nations are just colors on a map, after all. We'll make good little Germans out of the worst mo-ham-head-dan garbage we can find for you. This Middle Eastern bowel movement will improve your country, just you wait. Look at all the good they've done for the United Kaliphate or El-France or Swedenistan, or...

Almost 83,000 refugees arrived in Germany last month, and the government estimates that by the end of the year, 800,000 people will have come seeking asylum.

A country the size of Texas is expected to somehow handle this horrific mud slide. Die for the jew, it's the right thing to do. 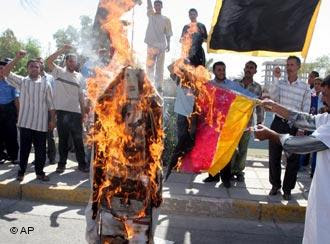 The Dresden police said that about 250 people, some holding bottles and waving flags associated with right-wing groups, demonstrated late Saturday and early Sunday near a former building supply outlet in Heidenau, a town of about 16,000 people on the Elbe River south of Dresden.

The resistance, such as it is. Helplessly shake your fist at the B-17 unloading its cargo of death, you hate-filled bigot. They even had flags, which we all know are extremely "races" and should be banned. More needs to be done. Not every German is shuffling quietly to history's gallows, just the vast majority.


Another 250 counterdemonstrators faced the right-wing groups, according to the police, who said they were able to keep the two groups apart.

The anti-White communists are on hand to make sure their own homeland gets placed on the islamic ash heap.


Some chanted, “Wir sind das Volk,” or “We are the people,” a slogan associated with the downfall of the East German regime in 1989 that has been appropriated by right-wing groups.

The jew communism never went away, it just got a little more subtle for a few years.


The police erected fences around the former building supply store where the refugees are staying. None of the asylum seekers were injured, the police said. 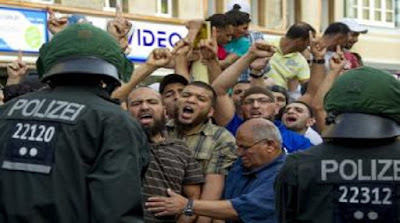 Mr. de Maizière said last week that every refugee who came to Germany should receive decent, secure housing and that each had a right not to be attacked or insulted.

Oh no, not insults! I think an alien monster here to prey on us deserves better than an unkind word here and there. Don't try to direct, Germany. Face the wall, suck on the ball gag, let the worthless invader have its way. You need to do this to survive, ask any jew. 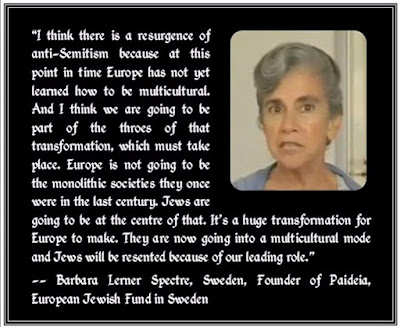