October 14, 2015
There was a time when fleeing the rot of "diversity" was seen as a viable survival strategy for Whites, never mind the fact that the jewish propaganda follows you everywhere and this, combined with relative isolation from the coming collapse, gives rise to a comically naive view of the benefits of brown invaders. Then the suicidal generosity, the pathology of the American White, begins. Consider Minnesota, if you have the stomach for it. If Sweden became part of the U.S.S.A. somehow, this would be it. Weakened by success, poisoned by kosher lies and now happily striding toward the gallows, singing a happy tune about the lack of "racism" and how the coming displacement and genocide is thoroughly justified because a White person gave a Somali biological weapon an unkind glance, once.

Harsh words and heartfelt sentiment were exchanged by community members and local officials on racial issues in Central Minnesota at the St. Cloud NAACP Community Conversation with Gov. Mark Dayton.

Time for negro slime to loudly announce their hatred for Whites while a careerist shithead panders and grovels, hoping this pitiful display of appeasement and genetic treason will keep the money rolling in and his Big Man position for a little while longer. This is the national conversation about race: low level chimping and eager agreement from cowardly traitors. 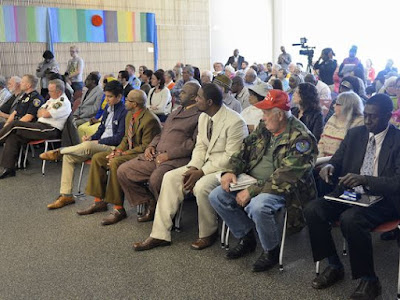 Lots of diverse backgrounds, including coal-colored aliens, Whites who would push their own mother into traffic for another day of unearned luxury and confused legacy Americans, bloated and impotent, wondering what the hell happened while they were watching the Africa Ball. Don't forget the professional victim group leaders and our good friend in big pharmacy (!!!) that was also there for reasons that I'm sure are logical and non-sinister.

We successfully killed our state and are now working on eliminating every last remaining White. If you don't like it, go to another state. Oh, by the way, we'll be importing the worst available African animals into Idaho and Montana, so maybe you should just stay and die here. 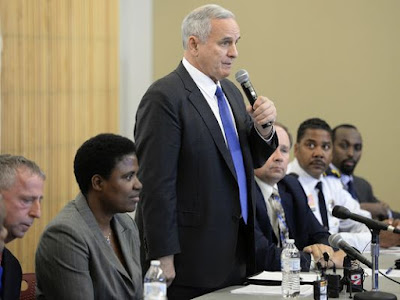 Scumbag governor betrays everything that matters to earn hate-filled stares from shit-colored monsters.

Dayton said he was aware of some of the racial issues happening in the St. Cloud area and urged participants to take a stand against what he described as "unacceptable, un-Minnesotan, illegal and immoral" behavior.

Not sure what's "illegal" about opposing your own demographic destruction, but if a professional anti-White said it, it must be true. I have no idea what he's even talking about. Minnesota is the gold standard for White capitulation, unless you count hurting Somali fists with our faces.

"If you are that intolerant, if you are that much of a racist or a bigot, then find another state. Find a state where the minority population is 1 percent or whatever."

Yeah. As if that's even possible, now that the agenda of chasing down every last White is being openly promoted by our criminal government. Meanwhile this deceitful turd huddles in his "one percent minority" gated community in a house purchased with graft, but he's still obviously your moral superior because he promotes White Genocide. 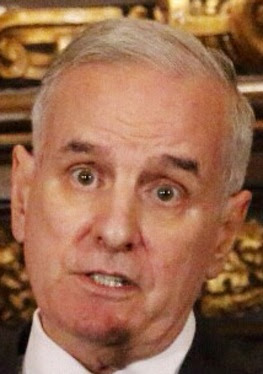 "We've successfully destroyed it, but I'm sure I'll somehow escape the consequences. Why are you brandishing knives, Somalis?"


"A lot of the tensions that we have in the community are stirred up by people who aren't stakeholders. They're not from here. They don't care what happens here. And they are usually incorrect," Anderson said.

"Yup, reckon I'll put on muh sheet, make the fifteen hour drive to St. Cloud, yell a slur at some "diversity" because I'm White and irredeemably evil and then drive back home."

But those comments did not stop several in the audience from questioning how the governor, Knoblach and Kleis are spending tax dollars on new immigrants, particularly those of East African descent.


Let's have a little less gutless prostration, and a lot more gibs me dat.

Must be "races" Whites causing this.

But he said the key reason many immigrants choose to come to Minnesota is because of the jobs Minnesota provides.


"Our economy cannot expand based on, white, B+, Minnesota-born citizens. We don't have enough," Dayton said.

Instead of addressing the problem of low White birthrates and working to reverse it, let's put our head in the "diversity" noose and import the worst garbage a garbage continent can provide. Time for negro, F-, Somalia-born sewage to flood in and save us.


Knoblach vowed to repeat last year's efforts in the Legislature to increase funding for the Minnesota Department of Human Rights, including money for the department's office in St. Cloud.

It sure is easy to spend other people's money.


"It takes both sides to make it work," Nimley said. "We need to take ownership of those concerns that we are raising. My question for you is, 'What are you doing in St. Cloud, Central Minnesota to become a more inclusive society?' "

Much more needs to be done and it's always Whites that need to do it. Are you being sufficiently worshipful toward 65 I.Q. African jihadans that see you as a target? Get your lips on the African buttocks, you awful "races."

CAIR Minnesota Executive Director Jaylani Hussein, who had previously addressed the crowd on his concerns on racial tension said his organization is not affiliated with terrorist groups.

Everything's fine, go back to sleep. Hey, I heard there's negro ball on the Talmudvision this weekend.

"As far as being called terrorists, the reality is that we are not a terrorist organization," Hussein said. "We are a civil rights organization and we are proud to be called bad names when we are challenging people to do the right thing."

If there's a discernible difference between terrorism and "civil rights," I sure can't see it. 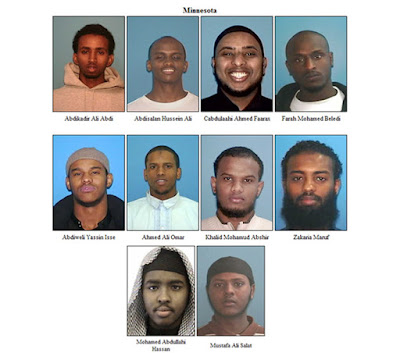