The "Abhorrent" Event at a Community College

October 02, 2015
I want to talk about something that happened recently at a community college in the western United States. That's right, I'm referring to a member of student government who questioned the holohoax and is now under attack from the jew. Yeah, I guess there was that other incident with the mulatto hopped up on violence fantasies, jewish pornography and its own inability to connect to society as a DNA pot luck abomination, but there really isn't much to say about that I haven't said a thousand times already. Kosher societal sickness, miscegenation madness, garbage culture, ham-handed gun grabbing, we've heard this song before. Once our enemies realize that a mystery meat that was very spiritual but not religious and wanted to kill Christians is not the useful crisis it might have initially seemed the whole thing will get the memory hole treatment. Let's focus on the real victim, the innocent jew, who was brutally attacked by crime thought at some poverty tier communist indoctrination center.

An elected student member of Sacramento’s community college district is drawing criticism over his published Holocaust comments that one district official called abhorrent and contrary to history.

Thought crime, they only crime that still exists. How can we ruin this young man's life for questioning one of the sacraments of our State Religion?

Student trustee Cameron Weaver was quoted in a student newspaper as questioning the number of Jews killed in Nazi concentration camps.

Everyone knows it's the precious Subble-zillion and this number can never change, even as the hoax steadily collapses. The western camps weren't full of "homicidal gas chambers," the Auschwitz death toll keeps going down, there are no mass graves or any physical evidence, we're told Soviet reconstructions are real, but the magic number never changes and must never be questioned.

Nawrtzee murders! Women and children! Please ignore the 2.5 million that came back to life.

Time to update that plaque. Again.

“Now I’m definitely not gonna go out and venture and say anything like ‘Oh, [the] Holocaust didn’t happen.’ There are tons of people that make that argument. And from a really non-biased perspective, I completely disagree, but I also completely agree."

The mind of a communist indoctrination center victim. I think there's a rational argument buried in there somewhere, maybe. All right, he's barely even coherent, but I think I noticed anti-semitism so let's make a big deal out of this.


Weaver, 26, also suggested that some percentage of the 6 million Jews who died in the Holocaust actually died during earlier religious persecution.

Yes, this timid attempt to parse the unique and unbelievable suffering of g*d's chosen is a crime. Five to ten in a gulag sounds fair to me.

The Current reported that Los Rios Community College board president Dustin Johnson said in an email to the paper that Weaver’s comments were “troubling, misguided and abhorrent” and “contrary to established historic and scientific facts.”

Welcome to the modern U.S.S.A., where saying that the holohoax might be slightly exaggerated is "abhorrent." All animals are equal, some much more so.

She told the Sacramento Bee that an  interview with Weaver for a basic profile took a turn when he started talking about 9/11 and conspiracy theories.

Weaver is in his third year at American River College. He is paid an $8,500 stipend as student trustee. Weaver sent a letter to trustees saying the story didn’t reflect his views.

"Whoa man, I agree and disagree, but these aren't my views at all. Please let me keep my sinecure." 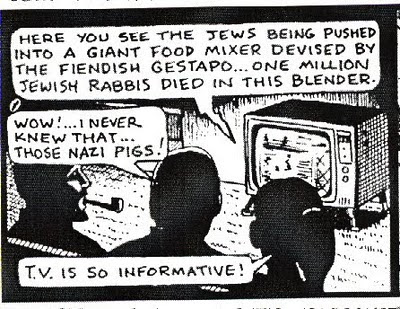