January 02, 2017
Here's a New Year's resolution for the negro: stop committing crimes. Of course, if it were that easy this failed race of genetic aliens would have fixed itself at some point during the seemingly endless fifty-plus years of paying, groveling, bleeding and appeasing under the guidance of the friendly traveling merchant. Instead, today's negro is arguably the worst we've ever seen, completely pathological and worthless despite every doomed attempt to wish away genetic reality. In Rahm's Chicago plantation we can now attach a numerical value to the pathetic content of their character.

There's also plenty of dead la-teen-ohs, lest I be accused of "racism," g*d forbid.

One of the most violent years in Chicago history ended with a sobering tally: 762 homicides, the most in two decades in the city and more than New York and Los Angeles combined.

Time to sleep it off, Chicago. After staggering around in the kosher intoxication of equality mythology and the lie of White responsibility for the predictable tar monster failure it's time to sober up. It's time to admit this is a failed race that lacks the mental resources to live in a complex White nation. It's time for them to be removed.

The nation's third largest city also saw 1,100 more shooting incidents last year than it did in 2015, according to data released Sunday by the Chicago Police Department.

Incredibly, purging the department of "racist" officers and appointing an incompetent 80 I.Q. magic negro to Chief of Police not only resulted in no improvement but in a dramatic collapse into African and Latin America all against all. Who could have predicted this? Eroding rule of law and tokenism seemed like the perfect solution, how could this have failed? It's almost as if the "racists" were right all along.

The statistics underline a story of bloodshed that has put Chicago at the center of a national dialogue about gun violence.

Nice to see the dinosaur media haven't lost its talent for completely missing the point. Must be those dog-gone guns. If only normal Americans had fewer rights, that would solve this. Don't forget to blame pilgrims. Anything but the actual cause.

The numbers are staggering, even for those who followed the steady news accounts of weekends ending with dozens of shootings and monthly death tolls that hadn't been seen in years.

As someone who followed the steady news accounts I can't honestly say I'm "staggered" by the end result of basic arithmetic.

Police and city officials have lamented the flood of illegal guns into the city, and the crime statistics appeared to support their claims: Police recovered 8,300 illegal guns in 2016, a 20 percent increase from the previous year.

An average I.Q. of 85. Even that pitiful number is inflated by mulattoes and mystery meats. No future time orientation. Poor impulse control. Heightened levels of aggression. Sloping foreheads. Muzzles. The complete inability to connect cause and effect. I know, it must be illegal (Eyyyy, nussseeen eeeesss eeeellleeeeegaaaal, maaaannng) guns! 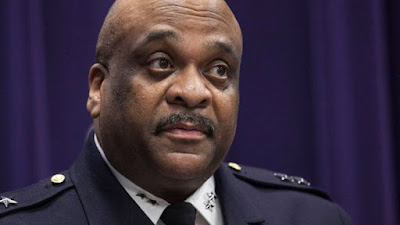 Chicago Police Superintendent Eddie Johnson said during a news conference Sunday that Chicago is among many U.S. cities that have seen a spike in violence, including in attacks on police.

Dey bee failin' in Bodymore and Walkee and Detroit Rot City too, get off muh bakk, mudda fudda.


He said anger at police, including in the wake of video released that showed a white Chicago officer shooting a black teenager 16 times, has left criminals "emboldened" to violent crimes.

I sure am angry at the "five-oh." Better go shoot Barkevious while he's sitting in a car.

He also said it's becoming clearer to criminals that they have little to fear from the criminal justice system.

"In Chicago, we just don't have a deterrent to pick up a gun," he said. "Any time a guy stealing a loaf of bread spends more time pre-trial in jail than a gun offender, something is wrong."

The bulk of the deaths and shooting incidents, which jumped from 2,426 in 2015 to 3,550 last year, occurred in only five of the city's 22 police districts on the city's South and West sides, all poor and predominantly black areas where gangs are most active.

Most be some kind of weird coincidence, but I suppose we can always blame "poverty," in the form of endless government hand-outs, for the bongo party.

Police said the shootings in those areas generally weren't random, with more than 80 percent of the victims having previously been identified by police as more susceptible because of their gang ties or past arrests.

You mean that morlock walking up the alley at 2 am wasn't a good boy turning his life around?

On Sunday, Johnson said he hoped several initiatives - including more street cameras in some of the city's most dangerous neighborhoods, and the expansion of gunshot-detection systems - would lead to more arrests and drive down the violent crime rate.

"It's almost like a pull back so they (gangs) can kill each other sort of thing," said the Rev. Marshall Hatch, a prominent minister in one of Chicago's most dangerous neighborhoods on the West Side.

Now to just wall everything off and let the problem solve itself.

"Criminals watch TV, pay attention to the media," he said. "They see an opportunity to commit nefarious activity." 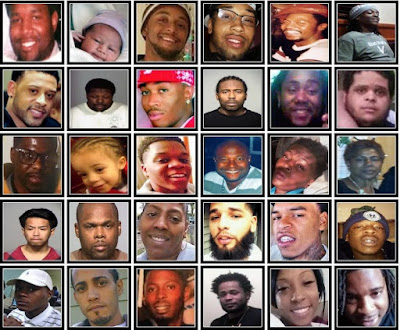