It All Happened So Fast

April 17, 2019
It's my pleasure to announce that the burning ruins of Notre Dame Cathedral have mostly been extinguished. We can state with perfect confidence that all this unpleasantness was just some sort of bizarre "accident" and certainly not a worthless moe-ham-head alien unleashed by the jew attacking its benefactors. Not like all those other times. Also, this is not a metaphor for anything so please stop saying it is. Everything is fine. Take off that yellow vest and go back to sleep. We should have it rebuilt in a mere four decades. At some point during this interminable reconstruction the fallen symbol of the dying West might turn into a mosque, but this is fine, "diversity" is our mighty strength. Yes, things couldn't be better. You are lucky to be alive right now, to enjoy such wonders. Say, how are things in California?

A naked 29-year-old man brandishing a knife was shot and killed by a security guard after a bizarre series of events Sunday afternoon in which he reportedly plowed his car into a Palmdale fast food restaurant, and then stabbed an elderly man at an adjoining eatery.

Yeah, that really is something, oh wow. One of your replacements went nuts, very different from the usual natural conservatism exhibited by the foreign looters pouring across an undefended border. Thank g*d we have our priorities straight, like flushing 100 billion shekels down the negro toilet and protecting our great ally Israel. Don't think I've stopped keeping an eye on that animal Assad. We really need some more war over there.

It began when the suspect, described initially as a shirtless Latino man, crashed his car into into the wall of a Carl’s Jr. restaurant, according to the Los Angeles County Sheriff’s Department.

They're better Americans than you, you stale and pale holder of evil privilege. This naked, knife-wielding piece of la-teen-oh trash is the raw material for muh democracy. We need many, many more for all the new factories we should be getting. Unskilled manual labor has never been more relevant, to say nothing of welfare dependency and criminal mayhem at a "Carl's Junior."

He then got out and ran across the street to a nearby McDonald’s, during which time he undressed completely.

Deputies said the man, now naked, entered the McDonald’s and stabbed an 88-year-old man who was eating with his grandson.

Free range victims are claimed by the deranged may-hee-can invader. "Diversity" is our mighty strength. We have always been a land of immigrants. Everyone is equal. White Man Bad. The jew is g*d's chosen and the light of the world.


As the suspect was coming out of the McDonald’s, he was confronted by an armed security guard, the sheriff’s department said.

In Clown World we need armed guards at Clown Burger. If the sawed-off alien inferior doesn't start behaving itself we'll have no choice but to impotently threaten to close the border. In one year.


When he tried to assault the guard, the guard shot him at least once, hitting him in the upper torso, deputies said.

This is why you need to be armed. When a Mitt Romney voter is out of control, this is the only answer.

Both the suspect and the stabbed customer were taken to local hospitals. The suspect was pronounced dead.

Pablo took the dirt siesta. This is the closest thing to a happy ending you're going to get here in Mexico North.

“I see a man standing right here,” witness Irvin Diaz told CBS2. “And all I heard was ‘pop, pop.’ And I came over and saw this man on the ground. He was naked, holding his stomach.”

Deputies are investigating the cause of the accident and are searching for a motive.

What do you think, Encyclopedia Brown? Please turn to the back of the book for the amazing solution to "The Case of the Taco Terror." 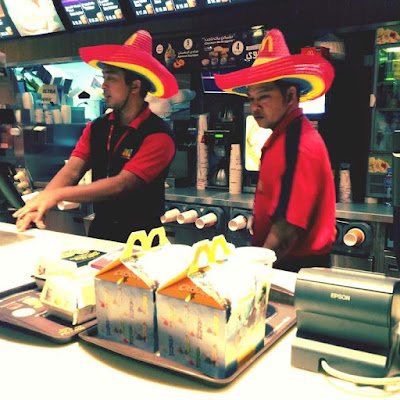