Working to Free Ourselves


What you are witnessing is the coming race war once the now inevitable collapse has occurred. Dark monsters from a nightmare attack an older White man in the Chiraq zoo. All we need is a jew in the background giving its biological weapons orders and we'd have a perfect metaphor for 2019 America. Did I mention that White Nationalism is evil and must be stopped? Allowing Whites to discuss our collective interests and future survival is deeply wrong, a panel of international financiers, zionists, moon cultists and living fossils said so. Once non-kosher political speech is outlawed everything will be fine. Shut up, keep paying and die. You have lots of privilege.

The orcs awkwardly attempt to bludgeon their stale and pale victim, but he's able to create enough separation from the dangerous inferiors to deploy a handgun. Armed Whites, the other vile dragon that must be slain by our elected criminals once they've outlawed peaceful dissent towards the ruling synagogue. The unseen negro sows who had previously been documenting this racially motivated broad daylight attack with depraved indifference now start screaming and carrying on with all the reserved and thoughtful nobility the mule of the world is noted for. The groids retreat. Various assorted "diversity" drifts across the screen as the video ends without any true resolution. I guess we're taking our time delivering the 100 billion shekels to the tar monster "community," because that's definitely going to lead to discernible improvements in the genetic aliens.

Video emerged today of an armed man pulling his weapon to ward off two apparent attackers near the Magnificent Mile, just two days after widespread mob action prompted police to arrest 21 people in the area.

Yeah, I'm pretty sure that's what I just saw. On the other hand, we must learn not to trust our lying eyes. Until a jew signs off on this, I'll consider it "apparent." Also, "widespread mob action." I guess electing E.T. the slot-licking space monster and appointing the magical left-handed negro police chief is only leading to very gradual progress as far as the dark hordes are concerned. If only we'd condemned White Nationalism sooner. They were just swarming over a dying city because of "racism" and muh slabery. The vanishing Whites population really needs to be humiliated and punished more so this stops.

The video, filmed from inside McDonald's at 10 East Chicago, shows two males attacking a middle-aged man who appears to be a security guard.

365 Black. Clown World at the Clown Burger. Those crazy "males" and their wacky antics. Must be the "toxic masculinity" we keep hearing about from semitic feminists.

The man is slammed against the restaurant’s outside wall by the pair who punch and grapple the older man as he works to free himself.

Yup, I guess I better get to work freeing myself from the congoloids attempting the old polar bear hunt. A little honest labor, pulling free of those brown paws, I'm really getting busy. Now to start working to free our people from the sickening nightmare that is modern America.

Within moments, one of the two apparent attackers picks up an object that appears to be a pepper spray canister while the armed man continues to struggle with the other person.

Like I said, we're getting an incomplete story. The "apparent" victim almost certainly provoked this. He is, after all, a White male, the source of all evil and the reason our windmill collapsed.

Suddenly, the man with the canister runs away as the older man returns to camera view with a handgun pointed raised at shoulder height.

You need to be armed. You need to avoid the "minorities." Our own criminal government wants us dead. They're not even bothering to lie about that, not anymore.

A Chicago police spokesman said no report had been filed in connection with the incident.

I know our complete incompetence in the face of the coming cannibal state looks bad, but before you get all judgemental, I should point out how we haven't been accused of "racism" in several days.

A spokesperson for McDonald’s said, “We will continue to take appropriate measures to provide a safe and enjoyable experience for our customers.”

Measures like "doing nothing" and "making empty statements after negro attacks on people without color." 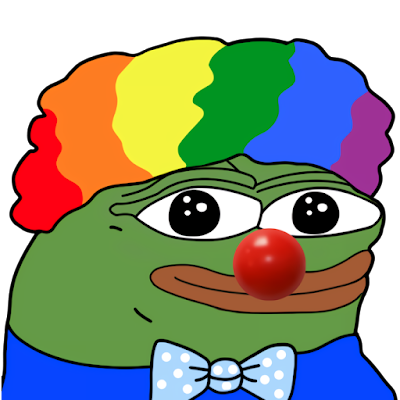