Failed in the Face of our History

May 29, 2019
The greatest danger facing Germany is the sudden resurgence of "anti-semitism," defined as a completely unreasonable hatred of g*d's chosen. You and everyone you love weren't chosen and are destined to be replaced by brown slaves, sorry. This does not give you the right to make even mild criticisms of the traveling merchant, of course. Any opposition to your carefully planned kosher destruction must be silenced. Also, I must remind you all these hard feelings are occurring for no reason whatsoever, just like in 1932. You're probably just jealous or something, you evil goyim (this is a slur jews call you). Fortunately, we have a solution. You can now put a newsprint yid lid on your empty head and advertise to everyone that you're the poisonous mushroom's bitch.

German daily Bild published a cut-out-and-use kippa on Monday in a bid to fight rising anti-Semitism, after Jews were warned about the potential dangers of wearing the traditional skullcap in Germany.

Be sure to cut out and put on your kike cap, shkotzim. It's like being back in kindergarten, if it was taught by a human-shaped demon. Get on with this childish display of cowardice, submission and depravity, you piece of unclean meat. You don't want to commit "Head Crime," do you? Bow down to evil.

Over the weekend, Felix Klein, the German government's commissioner on anti-Semitism, said he "cannot advise Jews to wear the kippa everywhere all the time in Germany", in an interview given to the Funke regional press group.

Your rapidly dying ancient homeland has a special commissioner to promote the interests of alien criminals. Let that one soak in. Meanwhile, the average German is so demoralized and spiritually broken they'll probably put a circle of paper on der kopf out of fear of losing what's already long gone.

Israeli President Reuven Rivlin voiced shock at Klein's warning and said it was a "capitulation to anti-Semitism" and evidence that Jews are unsafe in Germany.

Speaking of capitulation, put this ersatz hat on so everyone will know you're happy being one of the gentile slaves promised by the talmud.

Bild, Germany's top-selling daily newspaper, waded into the debate, calling on readers to "stand in solidarity with (their) Jewish neighbours" by making "their own kippa", bearing the star of David, to "raise the flag against anti-Semitism".

This will help moon cult enemygrants identify victims who are guaranteed not to fight back. I don't need to think for myself or even acknowledge obvious dangers: I've got some of page five acting as a semitic power dome! 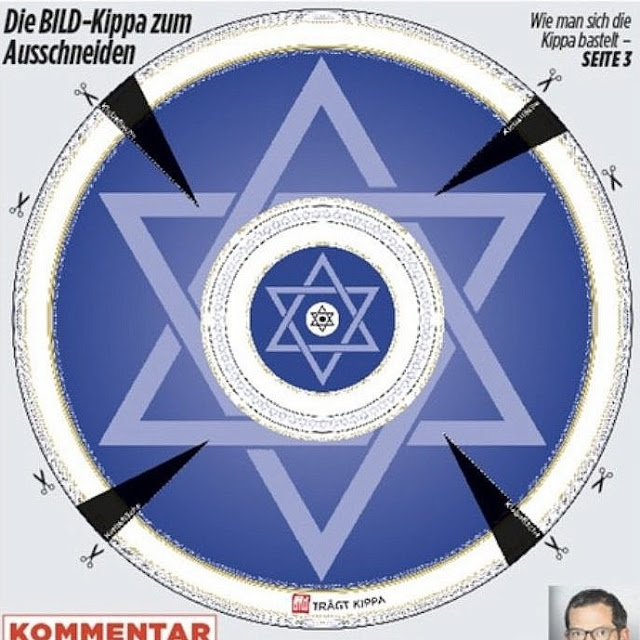 After you cut this out you can use the same scissors to remove your scrotum.

Rejecting the warning to leave off the kippa "seven decades after the Holocaust", Bild's chief editor Julian Reichelt wrote: "There is only one answer to that: No, it cannot be the case!

Hollow what? I've never heard about that one. Understandable, considering how reluctant the jew is to bring it up.


Urging readers to cut out the skullcap and wear it, Reichelt stressed that "the kippa belongs to Germany."

Even Swedes probably wouldn't go along with this pathetic madness. R.I.P. Germany.


Germany, like other western countries, has watched with alarm as anti-Semitic and other racist hate speech and violence have increased in recent years while the political climate has coarsened and grown more polarised.

There is absolutely no reason for this. Watching your country descend into a spiritual sewer and be slowly destroyed by rapefugee invasion is not the sort of thing that would logically stir up any resentments. Speaking of foreign invasion, we all know the sand monsters love the jew. This one is really baffling, I guess Germany just goes crazy every few decades or something.


Anti-Semitic crimes rose by 20 percent in Germany last year, according to interior ministry data which blamed nine out of 10 cases on the extreme right.

We really need to stop the scourge of White Nationalism. I'm also a big believer in zionism. Israel's status as an ethnostate is not negotiable.


The arrival in parliament of the far-right AfD, whose leaders openly question Germany's culture of atonement for World War II atrocities, has also contributed to the change in atmosphere.

You know someone's way out there politically when they question the endless prostration before hostile foreign parasites who were forced to do honest work, once.

Chancellor Angela Merkel has also deplored "another form of anti-Semitism" stemming from a major asylum-seeker influx, with many coming from Muslim countries like Syria, Afghanistan or Iraq.

Whoa. Cool it with the "islamophobia."

In one prominent case last year, a 19-year-old Syrian man was convicted for assault after lashing out with his belt at an Israeli man wearing a Jewish kippa skullcap while shouting "yahudi", Jew in Arabic.

The solution is to demand more appeasement and surrender from a corrupted, defeated and shrinking population of indigenous people, obviously. 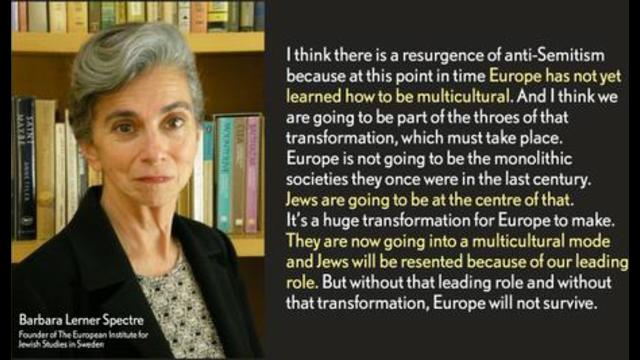