May 02, 2019
Over the past six months or so there has been an explosion of "anti-semitism" in the North American multicultural economic zone. By my estimate, approximately six million precious and innocent jews have been murdered in their satan houses by evil White Nationalists. We need to make even the most timid criticism of the demonic yid and their homogeneous ethnostate illegal; once this appalling tyranny of a tiny and wildly unrepresentative minority is in place the gentile should stop asking unpleasant questions, like why Soviet propaganda from seventy years ago is being taught as fact in our schools and generating sickening submission from our elected criminals. Yes, crime speech needs to be severely punished. To save our freedoms we had to destroy them.

The first-ever U.S. government delegation to the March of the Living annual Holocaust memorial arrived at Auschwitz on a somber Thursday morning, bringing several ambassadors and envoys in a show of solidarity against antisemitism.

Our ruling reptiles visited a communist reconstruction of a "death camp" to declare their undying loyalty to international banking, open borders, sodomy, pornography, usury, infanticide, nihilism and all the other gifts inflicted on our dying race by the light of the world. Here's a chimney that's not actually attached to anything, U.S. delegation. I guess the Stalinists weren't super concerned with accuracy or how this lazy hoax would later become the State Religion of your rapidly dying homeland. Here's a cremation oven. They'd put three or four jews in there at once. Yes, that would still work. No, really.

“I couldn’t be more proud of the unprecedented commitment of this administration to fight against antisemitism,” U.S. Special Envoy to Combat and Monitor Antisemitism, Elan Carr, told reporters outside the infamous concentration camp.

I could not be more proud of my dead gay country as it bows down to the devil in vaguely human form and parrots obvious lies in a kosher ritual of dominance and humiliation. I'm so tired of all the winning. It's just too much winning, make it stop. Honestly, I've had more than I can handle.

“There is no administration, no president, no Secretary of State that have ever committed themselves to this extent to fight against antisemitism, to protect the Jewish people, and to support the State of Israel,” he added.

America first. Nationalism is not a dirty word. Blind and senile, baked to a pleasing orange, a barking blowhard, no wall, 100 billion shekels down the "African-American" sewer, record low illegal alien unemployment, Whites completely forgotten and now the final betrayal of total and contemptible subservience to our jewish enemy. "Protect the jew alien!" I screamed at the Trump rally until my voice was gone. MIGA.

You know you're "doing the right thing" when your good buddies Germanistan and a pope who belongs on the end of a rope agree with you.

Gingrich told Breitbart News of the impact the delegation is hoping to make: “lt’s so important that we come here and honor the people who perished, and make sure that it never happens again.”

It never happened the first time.

Paul Packer, Chairman of the U.S. Commission for the Preservation of America’s Heritage Abroad, told Breitbart News: “To join U.S. ambassadors for the first time ever shows the commitment that the Trump administration has to the words, ‘Never Again,’ and to making sure that all our allies know the words of Secretary of State Mike Pompeo, that anti-Zionism equals antisemitism.

In 1945 some people did something. Since then, Whites have been under endless attack by the chosenites and their useful idiots. Our countries have been invaded, our culture reduced to a reeking privy of jewish vice, our future became a depressing prospect of being a hated and persecuted minority in dying nations built by our ancestors and thoughtlessly given away to hostile racial inferiors. We really need to silence any and all criticism of the poisonous mushroom. Even more than we're already doing. "Never Again" says the barely legible inscription on the ruins of the last holohoax memorial. "My name is the jew, King of Kings!" The lone and level sands stretch far away.

“Not only will the U.S. make sure that the Holocaust never happens again, but the U.S. will make sure all our allies know that antisemitism and anti-Zionism will not be accepted, either.”

This is definitely not what George Washington was referring to when he warned us against entangling alliances. The Liberty is on fire, must be those damn Egyptians. Look at that building collapse, holy fuck. Time to teach the entire world not to accept "anti-Zionism," until the American golem is exhausted and everything comes crashing down. 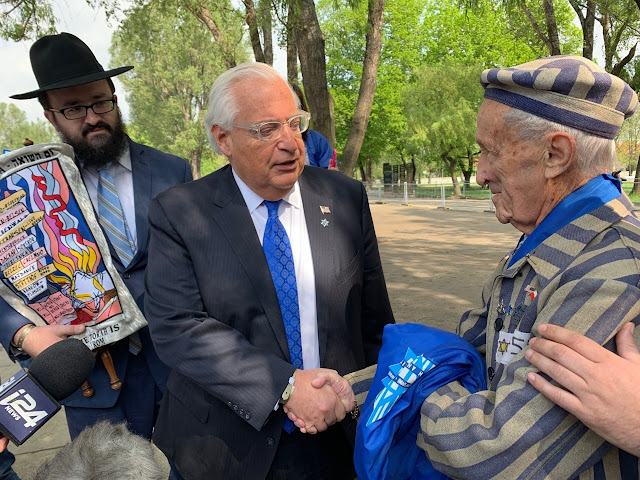 Yeah. I know what you mean. This is a lot of cynical dishonesty and groveling appeasement before the demonic to absorb all in one shot.

Edward Mossberg, 93, a Holocaust survivor who lost all of his family in the death camps, and who has participated in the annual march for two decades, told reporters that he was there to honor the dead.

My entire family up a chimney and made into a living room set. The least you can do is commit national suicide to make up for this imaginary crime.

Remember, JUDEO-christian, the jew is just like you, full of weak and poorly defined "love" and an open heart to forgive everyone.


“Only the dead can forgive.”

“I can’t stop thinking about the individual faces and the stories, what they were thinking in this moment.”

Probably something along the lines of "I can't believe the gentiles we endlessly attacked woke up and are now forcing us to do honest labor."


Hollywood actress Suzanne Somers also marched with the U.S. delegation, and told Breitbart News: “I’m here because I’m concerned about the rise in antisemitism, and I want to say that ‘Never Again’ means ‘Never Again’.”

I thought I'd never fit into this strident globalist bazaar again. Thank you, Lie Master.